Prejudice and discrimination sometimes made it difficult for Black Canadians to enlist during the early stages of the First World War. Many of the men tended to be placed in non-combat roles, but Private Samuel Watts was one of those who reached the front lines.

Samuel Daniel Watts was born May 25, 1882, in Texas and settled in Canada by 1904. He enlisted on May 17, 1916, becoming the first Black Canadian from central Alberta to do so. Samuel later became part of the 187th Battalion of the Canadian Expeditionary Force (CEF).

Watts was known to be musically inclined and had been part of the town band when he previously lived in Fort Macleod, Alberta. He wrote several pieces of music; his “Remember Me in Flanders” was printed in the Red Deer Advocate in 1916. It’s quite apparent that by joining his battalion’s band the talented Watts continued to enjoy songwriting even after enlisting.

Group photograph of the 187 Battalion in the Innisfail area. Watts enlisted in 1916. (Credit: Libraries and Cultural Resources Digital Collections, University of Calgary, CU1134799)

Needing reinforcements, it wasn’t long before the 187th Battalion was called to action by the CEF. The 187th departed from Red Deer in November 1916 following a small, but emotional ceremony. The local newspaper reported that “It was a heart-rending scene in many ways: the departure of the “boys” who might never come back; […] but it was thrilling as well; thrilling with the pride of those who felt that their husbands, or their fathers or their sweethearts or brothers were going to the great war, to die if such a sacrifice should be necessary, that the country might live on in freedom.”

Following a brief stop in Calgary, Watts and the 187th Battalion travelled eastward to Halifax and boarded SS Olympic (Olympic was sister ship to Titanic) on December 13th. After sailing to England, Watts was transferred to the 50th Battalion and posted to northern France.

In August 1917, Canadian soldiers launched an attack on the city of Lens in order to weaken the German forces that had been straining allied troops in Flanders. Smaller, probing attacks were to be conducted on August 21, and just as some men were rounded up for a trench raid, Watts bravely stepped in and offered to take Vernon McDougall’s place. McDougall recalled, “We were going to do a trench raid. I didn’t really want (to) go, so Sam Watts says to me, ‘I’ll go for you this time and you take my turn next.’ Watts went over the top and never came back.” 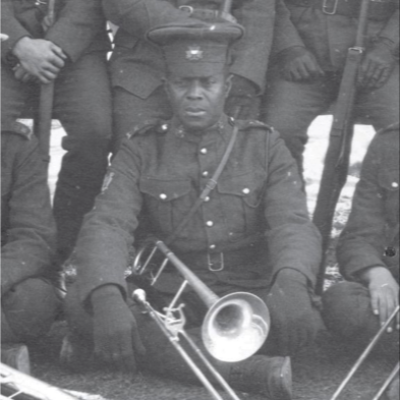 A member of his battalion’s band, Samuel Watts was known for his musical talent. (Credit: Dale Lenting and The Canadian Virtual War Memorial)

Indeed, Watts was seriously injured and immediately treated by medical staff. When he died of his wounds the following day, Watts became one of the 9,000 Canadian casualties recorded at Hill 70. He was buried at the Lapugnoy Military Cemetery.

He was survived by his wife Margaret Forshaw and their three young sons.

To learn about other Black Canadians who fought in the First World War, see James M. Franklin, No. 2 Construction Battalion and Reverend William White.

Black Canadians involved in other military conflicts include Richard Pierpoint who fought as part of the Coloured Corps during the War of 1812, and Welsford Daniels who served in the Canadian military during the Second World War. See also William Hall, V.C , the first Black recipient of the Victoria Cross.

Inset 2: A member of his battalion’s band, Samuel Watts was known for his musical talent. (Credit: Dale Lenting and The Canadian Virtual War Memorial)