For any military hero, hardships tend to be par for the course, and true inspiration is derived from the ways in which individuals who face such hardships overcome adversity and the obstacles they face.

Pierpoint was accustomed to war from an early age as he was born in Bondu, Africa. Tribes in this area continually clashed amongst each other while under the constant harassment of slave traders. At the age of sixteen, Pierpoint was captured and sent to the New World as a slave.

How Richard was able to secure his freedom is unconfirmed but is known is that he spent 20 years of his life as a slave. Many historians agree that Pierpoint’s freedom was most likely acquired through his involvement in the American War of Independence. In 1780 Pierpoint was listed as a soldier in Butler’s Rangers and would have spent the war fighting alongside British Loyalists, mostly in New York State.

Following the war, Pierpoint settled in the Niagara area where he continued to battle for the rights and freedoms of slaves. It wasn’t long before Pierpoint would get another opportunity to fight. In 1812, the 68-year-old Richard Pierpoint successfully established the Coloured Corps, a unit made up of free black men. Here he would serve as a Private throughout the war.

After once again bravely serving the empire, the only thing on Pierpoint’s mind was to return to his home in Africa. Unfortunately, the colonial government would refuse his request, making it impossible for him to leave the New World. Instead, Pierpoint was granted 100-acres in the township of Garafraxa, near the current town of Fergus, ON.

Pierpoint would use his remaining years to assist the underground railroad and to help escaped slaves. He passed away in the winter of 1837-38, after becoming a hero to Black Canadians everywhere. 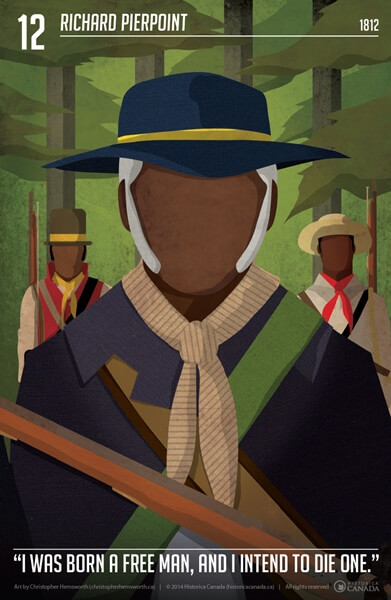 To learn more, see: The Coloured Corps and the War of 1812 (Canadian Encyclopedia) and Richard Pierpoint: A Very Canadian Hero (Toronto Star).

To see a video about Richard Pierpoint’s life, check out this Heritage Minute from Historica Canada.

Create your online business with the latest design trends