On May 31, 1902, the South African War, more commonly known as the Second Boer War, finally ended after 2.5 years of fighting. The Second Boer War was the first time that Canada sent soldiers to a conflict overseas.

When the first 1,000 Canadian volunteers set sail for Cape Town during the autumn of 1899 they promised themselves that they would be home by Christmas. Instead they found themselves embroiled in a vicious guerilla war that lasted nearly three years and cost the lives of 270 Canadians.

For a more detailed account of the etiology of the Boer War, see our Canadians in the Boer War article.

In total, approximately 8,000 Canadians participated in the South African War and four were awarded a Victoria Cross. Richard W. Turner, who was later promoted to command a division in the First World War, was recognized for leading a frantic rearguard action in a successful attempt to protect two artillery pieces. Actions like Turner’s were not that extraordinary in South Africa because the Canadians quickly earned a reputation for bravery. In fact, the Canadians were credited with winning the British’s first major victory. 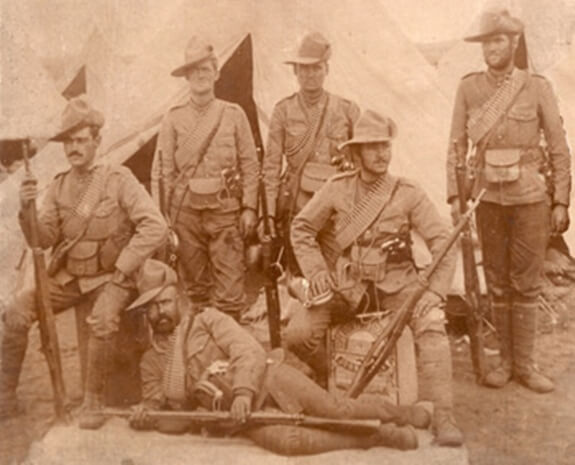 On another interesting note, the future author of the famous First World War poem “In Flanders Fields” also had his first combat experience in the Second Boer War (Canadian John McCrae).

Our other Boer War-related articles:  Arthur Richardson, V.C.,  2RCRI, and the Battle of Paardeberg.

To read a detailed account of Canada in the South African War visit Canada’s Veterans or Canadian History Bits.