When war broke out in South Africa at the end of the 19th century, Canada was split on the idea of supporting the British. After extensive deliberation, 1,000 Canadian soldiers set sail from Quebec City on October 30th, 1899. Sergeant Arthur Richardson, of the Lord Strathcona’s Horse Regiment, was part of the First Contingent that arrived. The war would produce many incredible stories about the young Sergeant. The most peculiar tale however, comes long after his adventures had ended.

On July 5th, 1900, near Wolves Spruit (Creek), South Africa, Sgt Richardson and his regiment found themselves under heavy fire from the Boer troops. It was then that Arthur noticed a fellow Canadian laying wounded, about 300 meters away. As the intense fire continued, Richardson rode out and rescued the soldier’s life. His valiant act of bravery that day was formally recognized giving Sgt Arthur Richardson the honour of becoming the first ever Canadian to be awarded a Victoria Cross while being a part of a solely Canadian unit.

Arthur would return to Canada where he resumed his prewar position in the RCMP. Due to poor health, Sgt Richardson had no choice but to end his service. He later moved to Liverpool, England, where he lived out his days in seclusion until his death on December 15th, 1932. 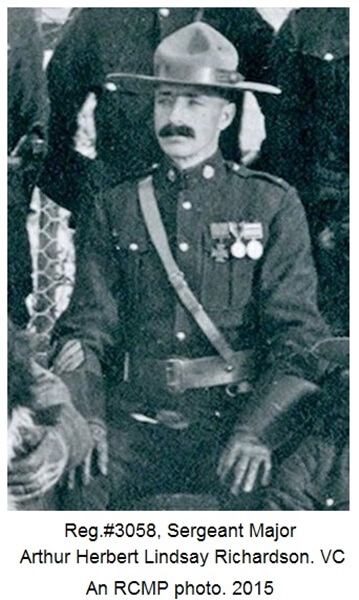 An odd side note to Richardson’s life developed in the 1920’s when he had his identity stolen by a Colonel Arthur Richardson of the Gordon Highlanders. It was not until the death of the fake Sgt Richardson that the deception was recognized. In fact, the real Sergeant Arthur Richardson was discovered marching in the impostor’s funeral cortege.

To learn more about Arthur Richardson, check out RCMP Graves.