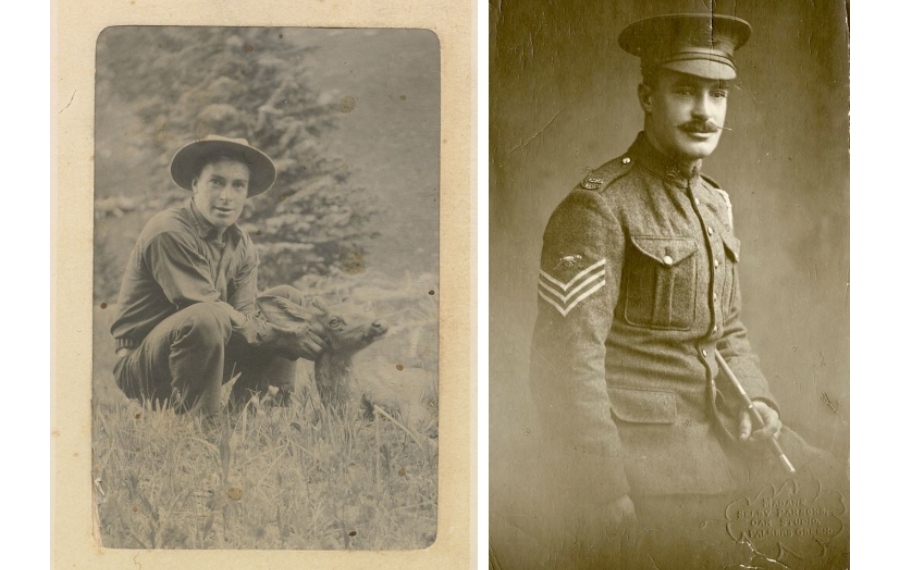 Sergeant Sidney Joseph Unwin was a prominent mountain guide based in the town of Banff, Alberta, who served in both the Second Boer War and the First World War.

Born and raised in London, England, Unwin served in the Second Boer War (1899-1902) as a gunner with the City of London Imperial Volunteers, a British corps assembled in 1900. He arrived in Banff, Alberta, at the turn of the century and thrived in the Canadian Rocky Mountains. Thanks to his remarkable horsemanship and outdoor skills, he grew to become an appreciated and integral member of the mountain community and founded his own guide and outfitting business. He befriended the renowned naturalist and explorer Mary Schaffer and tagged along with her and Molly Adams during their 1907-1908 exploration of Maligne Lake in Jasper National Park (JNP).

Unwin enlisted shortly after the First World War was declared and left his outfitting business in the hands of his sister, Ethel. He was assigned to the 22nd Battery, 6th Howitzer Brigade in the Canadian Field Artillery and arrived on the Western Front in the spring of 1916 after being promoted to the rank of Sergeant.

Unwin composed this poem while on the front and wrote it in the back pages of his diary. (Credit: Whyte Museum of the Canadian Rockies)

Starting on the first day of 1917, Unwin documented his wartime experience in a diary which is now attentively kept by the Whyte Museum of the Canadian Rockies. He recorded many things while in the field and composed numerous poems and songs that harboured a theme of war.

Like thousands of Canadian soldiers who fought in WW1, Unwin participated in the Battle of Vimy Ridge. On the eve of the battle, he sensed that the Canadian Expeditionary Force was on the verge of glory, penning, “Easter Sunday. The eve of big events for Canadians. Enormous amount of traffic everywhere. Lots of tanks going up.” His following diary entries testify to the high degree of strain, fatigue and casualties caused by the fighting; on April 9, 1917, “The big battle [of Vimy Ridge] starts. We advance [and] take lots of prisoners” and three days later, “I went to new position […] a terrible day, like a bad nightmare. Lost several horses, lots of dead men laying around.” Nevertheless, he made it out alive.

A month later, Unwin remained in the sector of Vimy Ridge. One day – suffering from heavy shell fire – he ordered the men under his command to retreat because the situation was too dangerous, leaving him alone to fend off an entire artillery battery. He loaded ammunition and fired back while his men waited in the safety of their dugouts. Although he would later be awarded the Military Medal for the bravery he exhibited, Unwin sustained extensive injuries to his head, face, and right arm. He wrote in his diary, “I got badly wounded at 6pm […] I do not remember anything until next morning.” When he awoke at the Casualties Clearing Station in the town of Barlin, he found that his right arm had been amputated. He was sent to the No.13 Stationary Hospital in Boulogne where he received further treatment and was transferred to yet another military hospital – this time in Leeds, England. 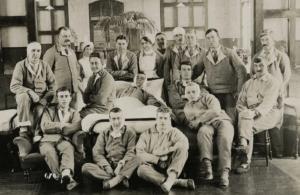 An undated photograph taken during Unwin’s convalescence in Leeds. He scribbled on the back, “I am in the centre. Some of the boys who are nearly well, carried my bed into centre of ward for the photograph. Sid. Four are Canadians.” (Credit: Whyte Museum of the Canadian Rockies)

Despite his wounds, Unwin did what he could to remain in good spirits. His mother (who still lived in London), his sister Edith, and some of his old friends paid him a visit in the hospital. During his convalescence, he occupied himself by attending concerts, going on walks, having tea with locals, exploring the town of Leeds, or even going to a few “picture shows” (now known as the movie theatre). Still, his condition rapidly deteriorated and he became one of the countless soldiers who never returned home. He died June 29, 1917, and was buried in the Southgate Cemetery in Middlesex, England.

To immortalize his sacrifice, Unwin’s name is listed on the Banff War Memorial. In remembrance of her fellow outdoor enthusiast, Mary Schaffer named Mount Unwin (3260m), located in JNP near the Maligne Lake Valley, after Sidney and designed a stained-glass window in St. George’s-in-the-Pines Anglican Church in Banff. 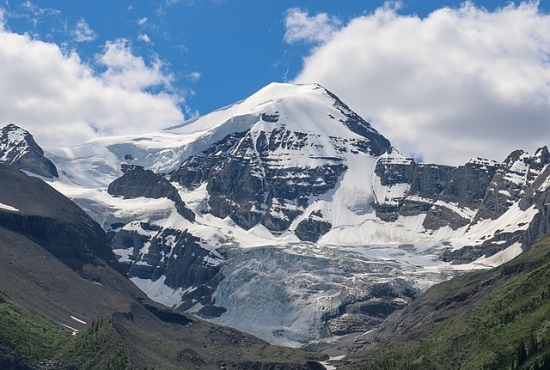 Unwin’s wartime diary has recently been digitized. To read some of its contents, see the Whyte Museum of the Canadian Rockies.

Valour Canada’s Canadians in the Second Boer War contains more information about the Canadian experience of the Boer War.

Main photo: (Left) Sidney Unwin on the shores of the Ashnola River (B.C), enjoying the great outdoors. (Right) Unwin photographed in his military uniform while in London. (Credit: Whyte Museum of the Rockies)