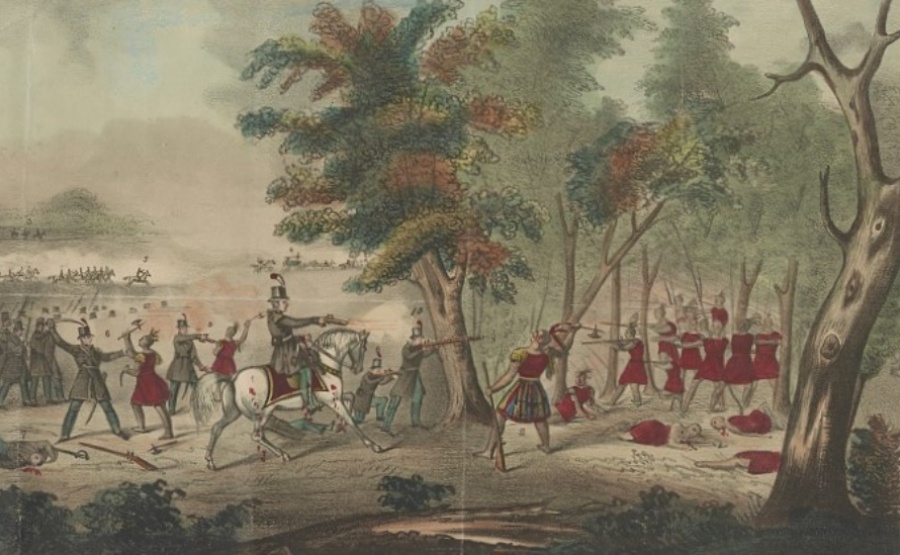 Tecumseh is one of the most prominent Indigenous figures in Canadian history. He was a Shawnee chief known for his involvement in the War of 1812 and his quest to secure land for First Nations.

Born in present-day Ohio around 1768, Tecumseh was the son of Puckeshinwa and Methoataaskee. He was raised in a context of warfare because the Shawnee experienced recurrent conflicts with American settlers as the two quarreled over the land west of the Appalachian Mountains. His father, a respected warrior and Shawnee chief, perished during one of these clashes. Tecumseh would follow in his father’s footsteps and received warrior training before also becoming a chief.

Although a new century dawned, tensions over land did not cease. In response to the successive waves of white colonists trespassing onto Shawnee territory, Tecumseh put his powerful oratory skills to use and proposed creating an Indigenous confederacy. He aimed to unite First Nations and defend the idea of commonly owned land which could not be sold without the consent of all Indigenous peoples. Many tribes across the Great Lakes region supported his confederacy.

As the War of 1812 broke out, the British set out to recruit First Nations allies in fear that they would otherwise join forces with Americans. Tecumseh hoped that British victory would slow American land encroachment, particularly as they were promised land in exchange for their military support.

On August 13th, 1812, Tecumseh met with Major-General Isaac Brock at Fort Malden. See our Isaac Brock  article. Together they forged plans to seize Fort Detroit. Their endeavor proved successful with Brigadier-General William Hull and his men surrendering three days after the assault began. As much as Tecumseh was pleased with Brock’s combative and aggressive approach to warfare, the latter praised the Aboriginal leader for his intelligence and bravery. 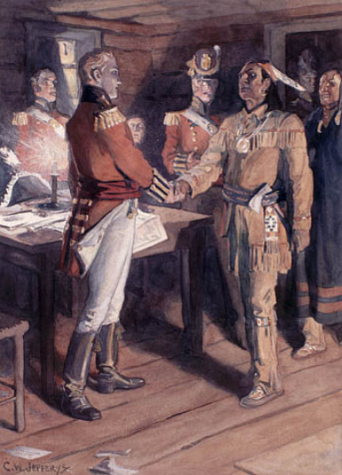 Tecumseh and Brock meeting at Fort Malden in 1812. (Credit: Library and Archives Canada)

The following year, Major-General Henry Procter attempted to siege Fort Meigs with the support of 1,200 warriors headed by Tecumseh and Roundhead, a Wyandot chief. The siege proved unsuccessful, though 500 American prisoners were captured. Two dozen captured Americans were subsequently killed by First Nations before Tecumseh – a vocal opponent of Indigenous violence towards whites – famously intervened alongside other British officers to halt the massacre. The humanity and compassion he displayed that day is greatly remembered and has since positively shaped his image.

The relationship between Procter and Tecumseh was slowly degrading with Tecumseh disappointed by his decision to retreat in direction of the Niagara area. Yet, the unwavering warrior was willing to go to extreme lengths to retain control of their land, “Our lives are in the hands of the Great Spirit- we are determined to defend our lands, and if it is his will, we wish to leave our bones upon them.”

Tecumseh met his fate during the Battle of Moraviantown (also referred to as the Battle of the Thames) on October 5th, 1813. Procter’s troops, plagued by low morale, hunger and fatigue, were no match for the 3,000 strong Americans, who caused the British to buckle shortly after the initial attack. Tecumseh and his 500 followers were then left to defend themselves. After half an hour of fighting in the backwoods, they too were overpowered by the enemy. It is during that final confrontation that Tecumseh was killed, though the precise circumstances surrounding his death and burial remain shrouded in mystery. It is thought that his followers retrieved his body from the battlefield and buried it in an unmarked grave in the nearby woods.

Tecumseh’s death signaled a significant decline of Indigenous resistance to American colonization and land expansion. He embodied the Native confederacy; therefore, any remaining cohesion or support dissipated once Tecumseh was no longer there to sustain it. Within a week of his death, tribes terminated their military alliance with the British and signed a truce with Americans. The land promised by the British was never granted.

For additional information on Tecumseh, see the Canadian Encyclopedia’s entry or watch “Indigenous Peoples and the War of 1812” to learn more about First Nations’ contribution to the War of 1812.