One of the Fathers of Confederation, Thomas D’Arcy McGee’s unexpected assassination shocked a nation and inspired the reformation of Canada’s military training and security.

Born in Ireland in 1825, McGee personally experienced the harsh reign of British colonial rule over his country. Like millions of other Irish, McGee left Ireland to pursue the promise of a better life across the Atlantic Ocean. At the young age of 17, McGee settled in Boston and gained notoriety as a passionate advocate and writer who was opposed to the British rule of Ireland. Hostile American sentiment towards Britain and their similar love of freedom complemented McGee’s anti-British views and helped bolster the reach of his writing and increase his political connections.

McGee returned to Ireland in 1845 at what was the beginning of the Great Famine. While there, the radicalized McGee led an arm of the Irish independence revolution who intended to overthrow their British rulers. The revolution did not gain enough support and, as conditions worsened, McGee fled back to America to escape arrest. He quickly reintegrated with a large community of Irish immigrants, many of whom had recently escaped the famine ravaging Ireland. 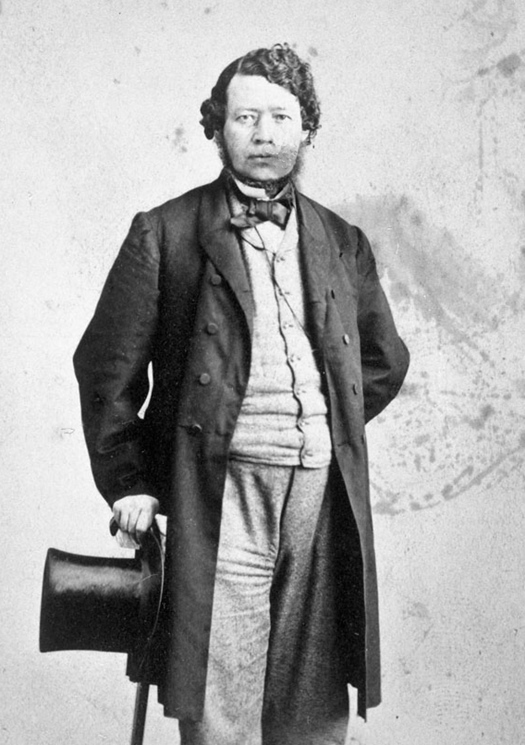 As McGee settled down—he married and started to have children—his revolutionary rebelliousness cooled significantly. McGee became convinced after visiting Canada that it had more to offer marginalized groups like Irish immigrants such as himself. In 1857, he made the move to Montreal and began a life of public service as a representative in Canada’s legislative assembly.

The maturing McGee grew increasingly conservative, both in his writing and his politics. Perhaps living in Canada, which, unlike America, remained content to be a subject of the British commonwealth, contributed to McGee’s decreasing animosity. He no longer advocated for violent rebellion but for loyalty to the Crown, distancing himself from the Irish community that still supported Irish independence.

In 1866, McGee vehemently condemned the Fenian Raids. The Fenians were group of Irish Americans seeking to gain control of Canada and use it as a bargaining chip to be offered to the British in exchange for Ireland’s freedom (For more information, see our “Fenian Raid” article). Even though they mirrored many of the activities and values McGee exhibited while living in the U.S. as a much younger man, he could no longer endorse their rebellious, armed antics. As a result, both American and Canadian Fenians viewed McGee’s condemnation as a deep betrayal and unfortunately, his change of heart would result in some new powerful enemies.

In 1868, McGee was assassinated outside his Ottawa home while returning from the House of Commons. Even though he maintained his innocence throughout the entire trial, Irish-Catholic Patrick James Whelan was found guilty by an all-Protestant jury and hung for the murder. Whelan was never proven to be a Fenian. 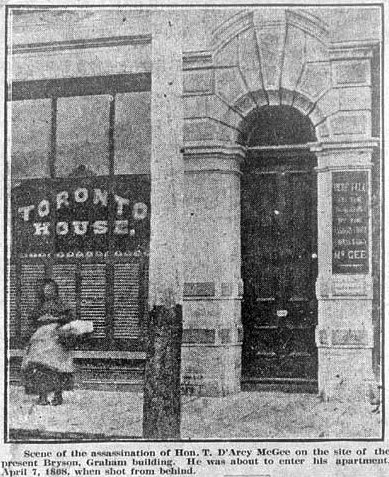 Scene of the Assassination of Hon. T D’Arcy McGee on the site of the present Bryson, Graham Building (Credit: Library and Archives Canada, Mikan #3406810).

McGee was fondly remembered for his support of minority rights and Canadian Confederation, and his funeral drew thousands of people. His murder inspired the creation of bodyguards for politicians and the Dominion Police to guard parliament buildings.

The Ottawa Citizen’s “Fifteen Canadian stories: The assassination of Thomas D’Arcy McGee” offers a detailed account of the event and the political context within which it happened.