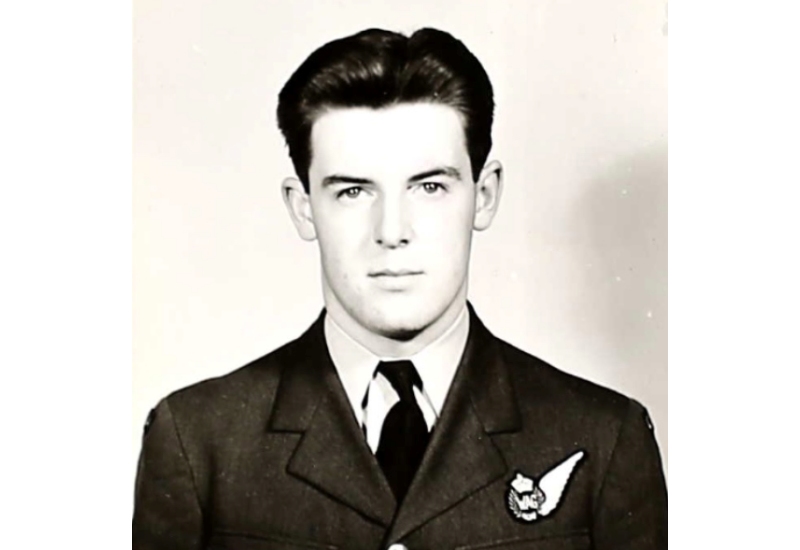 Born January 24, 1924, Flying Officer Frederick Edgar Dawson was raised in Calgary, Alberta. Throughout his adolescence, he engaged in multitudes of sports including baseball, basketball, swimming, and ice skating. He attended Crescent Heights High School and briefly worked as a clerk at a men’s hat shop before joining the war effort.

The Royal Canadian Air Force captured Dawson’s attention early in the war and he soon enlisted. The young man – who counted building model airplanes as one of his hobbies – expressed a preference for either becoming a pilot or another member of the flight crew (e.g., Navigator, Bomb Aimer, Gunner, Flight Engineer, et cetera).

He attended the No.2 Wireless School in Calgary to train as a wireless operator and air gunner. A wireless operator was responsible for issuing and receiving messages to and from the airbase. As in Dawson’s case, they occasionally doubled as reserve air gunners whose duty was to spot enemy aircraft. At the Wireless School, Dawson particularly excelled in theory and morse code examinations, and upon his training completion in April 1943, his squadron leader described him as an “excellent student and worker”. 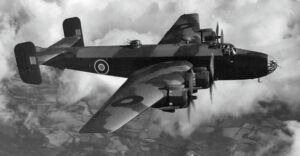 The 518 Squadron used Halifax Bombers (minus the bombing equipment, of course) like this one to fulfill their operations. (Credit: Wikipedia)

Thereafter, he was posted to the 518 Squadron of the Royal Air Force based out of Tiree, Scotland. Though situated miles and miles away from the primary theatres of combat, the 518 Squadron played an indispensable role in the Allied war effort. Every day, crews flew far out over the Atlantic Ocean to collect weather data such as temperature and air pressure. This was critical at a time when weather forecasts were determined exclusively through observations, and these forecasts were important for planning operations on the ground. Despite high rates of casualties, the squadron’s bravery was rarely highlighted; in the words of Warrant Officer Gordon Wilkes, “We were never glamorized on the front page of the daily newspapers, […] but we were always there, whatever the weather”. Indeed, Dawson was one who “always carried out his duties cheerfully and most efficiently, and was considered by many […] to be a most conscientious officer.”

Suddenly, tragedy struck. Dawson and seven other crew members were aboard a Halifax V LK704, returning from a 12-hour operation over the North Atlantic, when the aircraft crashed into a cliff on the Irish coast around 6:30 in the evening. Two women out for a stroll witnessed the accident and immediately rushed to help. Dawson was swiftly admitted to the sick quarters of the RAF Castle Archdale base, but was pronounced dead upon arrival. In a cruel twist of fate, it was January 23, 1944 –  the eve of what would have been his 20th birthday.

None of the crew members survived. Wing Commander Davies, P/O Glyn Gzowski, SGT C.E Hussey, F/O Vladimir Adimic, W/O Lloyd Upshall, SGT. D. P. Hewitson, and W/O Frank Ash died on impact. All their bodies were retrieved with the exception of those of Davies and Gzowski’s which were washed out to sea. 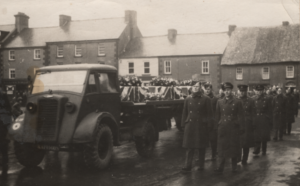 The funeral procession of a crash victim in Irvinestown. (Credit: Peter Boyle)

Dawson was buried four days later in the Irvinestown Church of Ireland Churchyard in Ireland. He left behind his young wife, Marion, and their 4-month-old son whom he never met. In 2002, Dawson’s widow and relatives of the other crash victims travelled to location of the accident and unveiled a memorial. Marion passed away in 2013.

For more details on the circumstances of the crash and the memorial near Bundoran, Ireland, see Bundoran Halifax Crash.