During the summer months following D-Day, battles continued on the seas between the Allied Forces and the Kriegsmarine (German navy). One of the continuing hotspots was the English Channel where naval mines were always a threat. One part of the patrolling Allied naval forces was the 29th MTB Flotilla (MTB = Motor Torpedo Boat). Of this smaller group, MTB 459 was an important piece that had already participated in the D-Day landings (June 6, 1944).

MTB 459, staffed by 3 officers and 14 men, was commanded by L/Cdr A. (Tony) Lawson. After dark on July 16, 1944, MTB 459 found itself a part of the 29th Canadian Motor Torpedo Boat Flotilla in the Bay of Normandy patrolling for enemy boats off the coast of Le Havre. Close enough to the German coastal batteries to be threatened by their shelling, the flotilla was moving in a zig-zag pattern to elude being targeted and hit. Around midnight they were notified that enemy minesweepers had just departed from the port of Le Havre. While the Canadian MTBs were moving into position to head off the enemy watercraft and take them out, Luftwaffe planes flew overhead and dropped flares thereby illuminating the flotilla for easier targeting both by the aircraft and the land-based artillery. One of the shells scored a direct hit on the engine room of MTB 459. Two men, Charles E. Dawson and Jack B. McMahon, were killed. 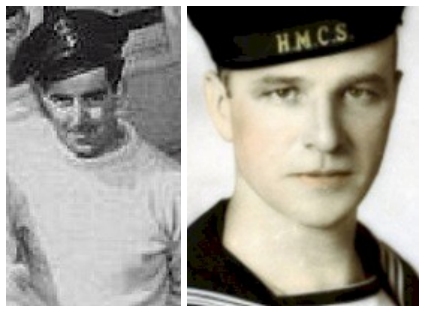 Following the explosion another boat, MTB 466, quickly moved to rescue by taking on passengers and towing the damaged boat back to safety. Assisting in the operation was MTB 464 who put down a smokescreen in order to prevent the enemy from seeing their exact position. George Halliday, a Stoker on MTB 466, recalls the events: “Jim MacKay and I went aboard the 459 with just the bow above water, it was then an air raid alarm was sounded and the 459 was quickly let out on a long line under tow. Jim MacKay and I spent the rest of the dawn hours perched on the bow until we were recovered later that morning.” (Credit: Naval Museum of Manitoba).

The crew of MTB 459, May 1944. Front row, 4th from the left is Jack McMahon, and on the far right, Charles Dawson (Credit: Naval Museum of Manitoba).