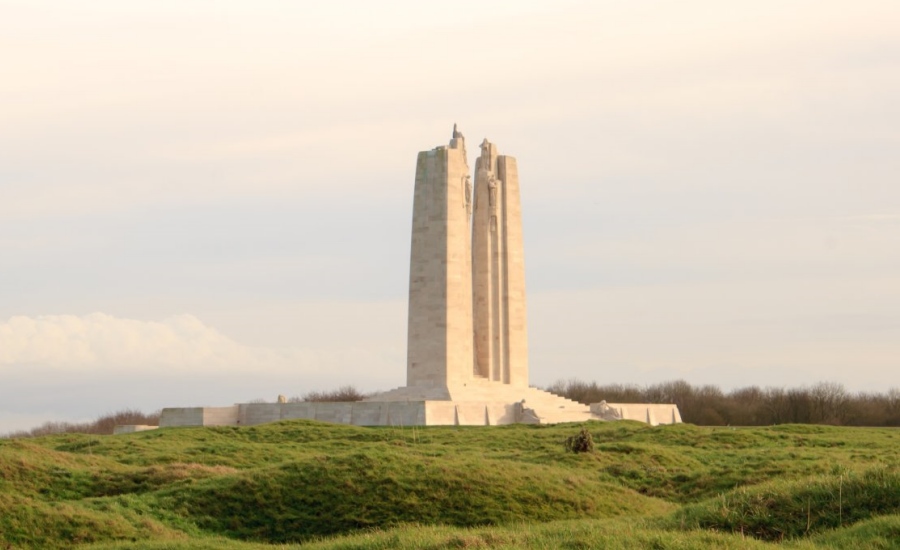 At the heart of a 91-hectare [1] park lies the Canadian National Vimy Memorial, tranquilly sitting atop Hill 145, a topographically high point on the ridge conquered by valiant Canadian soldiers over a century ago. The memorial – designed by Walter Seymour Allward – was unveiled in 1936 and now acts as a symbol of Canada’s contribution to the First World War and what Canadian soldiers could accomplish.

In 1920, the Canadian Battlefields Memorials Commission initiated the planning of eight memorials across France and Belgium to commemorate Canadian losses. With physical and emotional wounds still fresh, a bereaved Canadian society was only beginning to process the carnage derived from the First World War. Traditional grieving rituals were upended because the bodies of loved ones were unrecovered from the newly obliterated, crater-pocked landscape and families lacked a place to mourn their lost son, husband, father, or brother. Thereupon, in the next decade, memorials cropped up across Europe and North America to commemorate and honour the fallen. Memorials were the substitutes to nonexistent graves.

A design competition was launched by Canadian Battlefields Memorials Commission and of the 160 proposals submitted, Allward’s was chosen for Vimy Ridge. He explained that “When things were at their blackest in France, I dreamed that I was in a great battlefield. I saw our men going in by thousands and being mowed down by the sickles of death […] So I have tried to show in this monument to Canada’s fallen, what we owed them and will forever owe them.”

Skilled carvers working on the monument in 1932. (Credit: Library and Archives Canada)

Construction began in 1925, but regular delays ensued because Allward’s quest for the ideal stone proved more challenging than expected. He wished to feature marble even though it was not suited to the climate of northern France. While his lengthy search dragged on, Major Unwin Simson – the site’s first caretaker – occupied his men by having them restore the rapidly deteriorating trenches and preserve them using concrete sandbags (these trenches can now be visited). In the meantime, Allward eventually settled for limestone sourced from a quarry in Croatia.

Before work could begin on the monument itself, it was imperative to clear unexploded ordinances (e.g., shells, grenades, etc.) from the 91,000 square meter site and to reinforce the ground by filling-in the dugouts. Temporary studios were erected on site to facilitate the initial shaping of the limestone. Allward created half-sized plaster models of elements to guide carvers, however, he was always the one to add the final touches. Gradually, the monument took shape; eleven years later, and at a cost of 1.5 million dollars, the memorial was finally ready to be seen by the public. 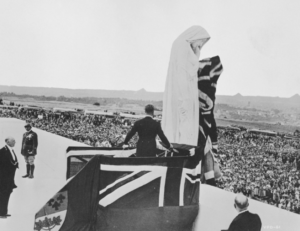 The Union Jack being pulled down to unveil the Canada Bereft portion of the monument, just moments after King Edward VIII (center) made a speech. (Credit: Library and Archives Canada)

The unveiling on July 26, 1936, was a grand occasion; King Edward VIII removed the Union Jack from Allward’s creation and revealed the solemn monument to public eyes for the first time. Six thousand veterans made the cross-Atlantic trip and figured among the 100,000 attendees. In fact, the federal government issued unique Vimy Pilgrimage passports specially made for the occasion. For countless Canadians who participated, the trip was a form of pilgrimage to commemorate the sacrifices of the dead as well as bring closure to a devastating chapter of their lives.

Placed on land ceded “freely and for all time” to Canada by an appreciative France, the memorial features two towers representing two countries, Canada, and France, brought closer by their shared goal of securing peace and freedom. A total of twenty allegorical figures – including Justice, Truth, Knowledge and Freedom – adorn the monument. At over 30 tons, the largest figure, known as “Canada Bereft” or “Canada Mourning Her Fallen Sons”, illustrates a cloaked and hooded woman looking down on an empty tomb. She expresses the collective grief of Canadians. On the base is inscribed, in both official languages, “To the Valour of their countrymen in the Great War and in memory of their sixty thousand dead this monument is raised by the people of Canada”. Perhaps the most striking feature is also one of the smallest: the names of 11,285 men who were not fortunate enough to return home – Canadians whose bodies were not found, but whose memory is preserved throughout the memorial. 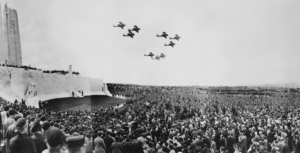 Planes flying across the sky, above the crowd of 100,000 and the monument during the ceremony. (Credit: Library and Archives Canada)

For more information on the Battle of Vimy Ridge, see Valour Canada’s article or our Road to Vimy Ridge website that describes Canada’s efforts in the First World War with a specific focus on Vimy. This page is dedicated solely to the monument and Allward.

Main photo: The memorial commemorates all the Canadians who died in the First World War, specifically those whose bodies were never found. (Credit: Havana1234/Global News)