April 9-12, 1917: The Battle of Vimy Ridge. In stark contrast to the ad hoc charge at Kitcheners’ Wood two years before, Vimy was an offensive that involved meticulous reconnaissance and planning prior to the attack. The aim was not only to be successful, but also to reduce Canadian casualties.

Through a combination of new triangulation methods, observations of muzzle flashes, and pinpointing the origination of sounds, the Canadians were able to locate some 175 German artillery pieces prior to the engagement. Accurate and precise counterbattery fire from the Canadians’ own artillery eliminated 85% of these and greatly eased the Canadians’ progress.

This phenomenal feat was enabled by the willingness of Colonel Andrew McNaughton (put in charge of the counterbattery effort by General Byng) to entertain and test the new methods; they had been proposed by Canadian officer Captain Harold Hemming and a trio of civilians, Lucien Bull, Lawrence Bragg, and C.G. Darwin, the eponymous grandson of Charles Darwin. 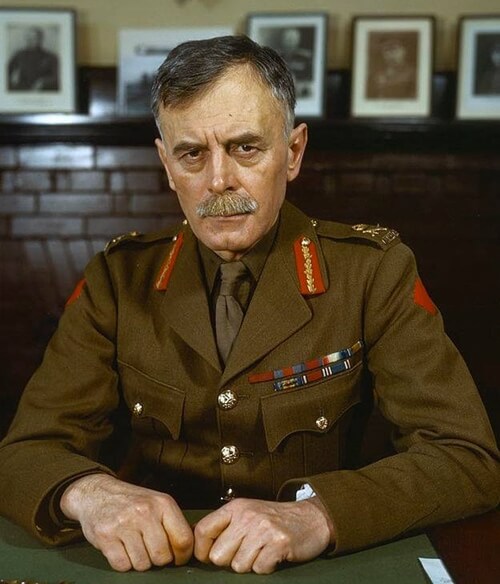 However, while this and subsequent barrages managed to neutralize a great deal of German threats, they would inevitably miss some. As a result, Currie’s recent emphasis on trusting the independent initiative and capabilities of individual platoons proved vital – provided with maps and aerial photos, Canadian soldiers were told to advance as far as possible using all movement formations as necessary; they were essentially told not to limit themselves to previous methods of moving across the battlefield in rigid lines and waves. Thus, despite the losses of many, points along the Canadian lines were still able to continue onward in the face of stiff German resistance. The result? By April 12, the Canadian Corps held the ridge. One Paris newspaper called it “Canada’s Easter gift to France.”

The barrage map for the Vimy operation, showing when and where the artillery lines would be (Credit: Library and Archives Canada).

For an in-depth description of the Battle of Vimy Ridge, visit Valour Canada’s The Road to Vimy Ridge website and “Guns Blazing”.

To learn more about Colonel McNaughton’s life and how he influenced the Second World War as well as the First, see the WWII Database.