By September of 1916, the Canadian 1st Division had moved to the Somme to prepare for their role in that battle. Initially things went well for the Canadians with the capture of the Sugar Factory and Courcelette (Sep. 15-22) by the Royal 22nd Regiment (Van Doos) and the 25th Canadian Infantry Battalion (Nova Scotians) in an attack that employed the first use of tanks on the Western Front. See Valour Canada’s video about this to learn more: Courcelette – The First Tank Battle.

The 1st Brigade’s (Bde) attack on the Regina Trench was planned for Oct. 8, 1916, and the advance commenced promptly at 0450 hours (4:50 A.M.) under cover of artillery, with the 3rd and 4th Battalions in the assault. The 4th Battalion (Bn) advanced but as they neared the German front line, they encountered wire which was mostly intact. Many Canadians met their end in the wire as they were cut down by gunfire, while those following searched desperately for a way through. An opening was eventually found, and the troops flowed like water through the breach and into the German 1st trench, where the fighting occurred using pistol, bomb, clubs, and other handheld weapons. The opening in the wire inadvertently placed the 4th Bn more or less on top of the 3rd, with the right flank of the 4th Bn actually occupying where the left flank of their advance should have been. Nonetheless, the two intertwined battalions captured the German front line but as daylight broke, the 4th Bn realized Germans were still occupying the same trench to their right. The 4th Bn immediately commenced bombing down the trench line for approximately three hundred yards, capturing over one hundred Germans as they went. Once the German Line on the 1st Bde’s frontage was in Canadian hands, the futility of attacking the German Second Line of Defence became apparent to the Commander of both battalions; he noticed that the German second line was at least seventy-five yards away across flat, open ground whose only feature was a sea of intact wire. It was quickly decided that such an attack would be futile. 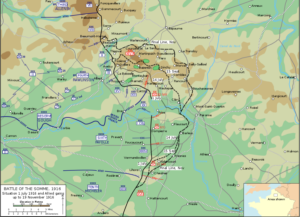 The only alternative was for the respective battalions to bomb their way up the communications trenches that were located between the first and second German lines. After a sequence of severe smaller battles with no quarter shown by either side, the Canadians of the two battalions were forced with the reality of being either overrun or having to withdraw to their original jumping off positions (while bringing as many of their wounded and German prisoners as possible). The decision to pull back was made.

The attack on Regina Trench, the longest German trench on the Western Front, was a failure. In some locations along the line Canadian troops were killed by the enemy as soon as they went over the top. The Canadians suffered 770 casualties out of the 1100 men who took part in the attack (70% casualty rate), yet somehow, they managed to return with 240 POWs (prisoners of war). They were also able to dig a trench forward from their own original front line; that new trench was linked with the 23rd British Division on their right, so the attack was not entirely a loss. 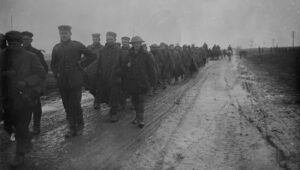 The Commanding Officer (CO) of the 4th Bn also considered the attack a failure and the unit’s war diary provides the reasons for it: (i) the inability to secure the entire objective, (ii) the exhaustion of the supply of Mills Bomb – they are crucial to trench clearing, (iii) the lack of capacity to successfully reinforce and resupply, and (iv) the uncut German wire. Strangely, the 4th Bn war diary does not include casualty numbers for the attack, but they almost surely suffered heavily given the 70% casualty rate mentioned earlier. 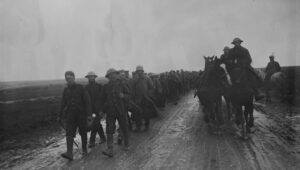 For more information about the attack on Regina Trench, visit the 48th Highlanders or the Vimy Foundation.

Our thanks to Sheldon Maerz for allowing us to post this article.