Nursing Sisters were an integral part of the First World War. Caregivers and healers, they helped with surgeries and comforted the wounded, both before and after procedures. They also cleaned and dressed wounds, ranging from minor to severe, and made patients comfortable while they healed. More importantly, nurses made sure dying soldiers weren’t alone in their final moments.

However, their service came at a cost. Sixty-one Nursing Sisters died between 1915 and 1922. Deaths could be the result of diseases such as Tuberculosis and Meningitis; others died from air raids and bombings. Fourteen of Canada’s Sisters were killed when the Canadian hospital ship Llandovery Castle was sunk by a German U-Boat in 1918.

Nursing Sister Margaret Ann Low (Lowe) was one of the nursing sisters killed in an air raid. Her death was the result of wounds sustained during an attack at the hospital where she was stationed.

Margaret Lowe was born in Morayshire, Scotland, on January 26th, 1888. Born to a Canadian father, she moved to Binscarth, Manitoba when she was young. While growing up in Canada, she decided to become a nurse. Lowe received her training at the Winnipeg General Hospital and graduated in 1916. After her graduation she enlisted as a Nursing Sister with the Canadian Army in the early spring of 1917. 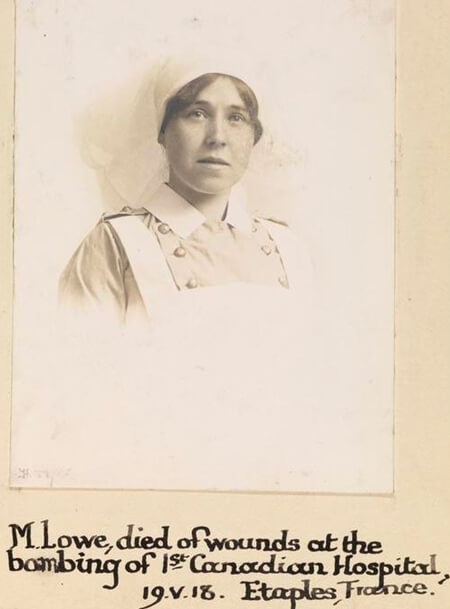 The new nurse received her first orders and was sent overseas. Stationed in Kent at the beginning, she worked at the Orpington General Hospital. Lowe was later moved to what would be her final hospital, the 1st Canadian General Hospital in Étaples, France.

On May 19th, 1918, a German air raid hit the hospital. Sadly, she was wounded, suffering a skull fracture and severe chest wounds. Nine days later the once vibrant young woman would succumb to her injuries while at the 24th British General Hospital.

Sixty-six patients and staff died during the attack, this included two other nursing sisters, Katherine MacDonald and Gladys Wake. 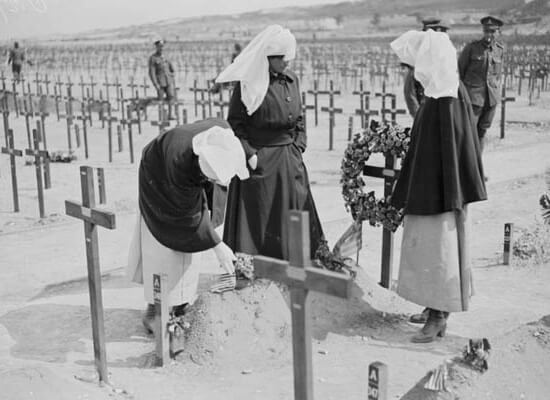 All 3 women were buried in the Étaples Military Cemetery in Pas de Calais, France.

To see Margaret’s Memorial, visit the Canadian Virtual War Memorial or to read about Margaret’s life, visit Lives of the First World War.