On June 27, 1918, the Canadian hospital ship HMHS Llandovery Castle was torpedoed off the coast of Ireland. The ship was properly marked as a hospital ship; its appropriate lighting and the red cross painted on its hull were clearly visible to friend and foe alike.

As the ship sunk, one of the lifeboats was pulled into its whirlpool and all fourteen nursing sisters onboard that smaller vessel were drowned. After Llandovery Castle had completely sunk, the German U-boat surfaced and opened fire on the remaining lifeboats. Over two hundred Canadians were killed, including Nursing Sister Alexina Dussault. 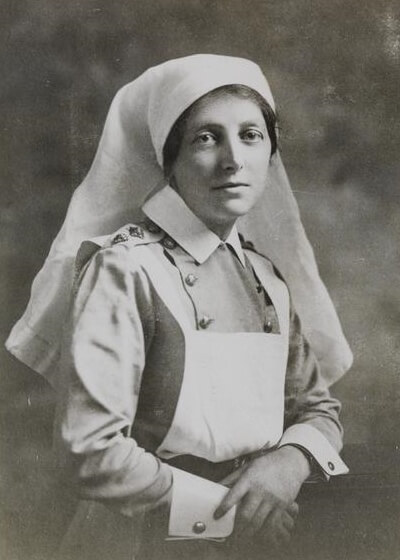 Alexina Dussault of the Canadian Army Medical Corps, lost on June 27, 1918, during the sinking of the Llandovery Castle (Credit: Imperial War Museum WWC-H22-17-1).

A trained nurse from Quebec, Alexina joined the Canadian Expeditionary Force on September 25, 1914 shortly after the war was declared. In a brave and selfless act, she lied about her age in order to enlist. The ruse worked and Alexina was sent to France where she was posted to a casualty clearing station (Due to the excellent medical care provided at these stations ninety-five percent of soldiers who made it to one of these medical outposts survived their injuries). In February 1916, Alexina volunteered for hospital ship service and was granted that posting. She proceeded to spend the next two years caring for soldiers on the long voyages from England to Canada until that fateful day, June 27, 1918. 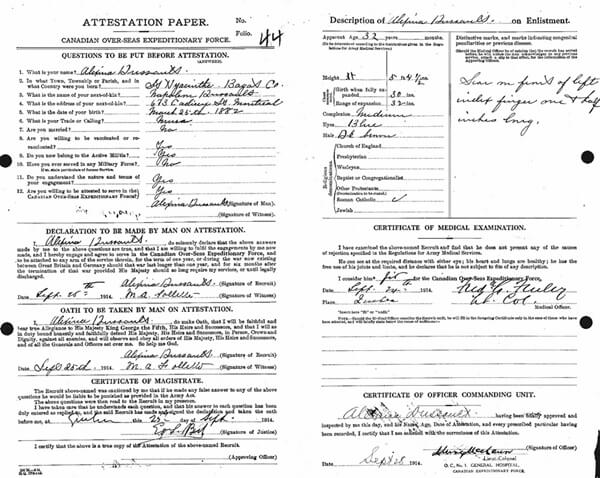 Alexina’s attestation papers. These were completed upon her enlistment (28 Sept. 1914) (Credit: Library and Archives Canada).

The sinking of Llandovery Castle was considered one of the worst atrocities perpetrated in the war and was used as a rallying cry for Canadian soldiers during the last Hundred Days of the First World War.