The summer of 1974 was a difficult time for the Canadian Armed Forces. Over the course of the summer 15 Canadian lives were lost while performing overseas peacekeeping missions. In honour of these individuals as well as in recognition of the efforts of the other 125,000 Canadians who have participated in international peacekeeping missions the Canadian government declared August 9 National Peacekeepers’ Day.

Over 130 Canadians have lost their lives in overseas international peacekeeping missions since the dark summer of 1974. The Canadian Armed Forces’ dedication to these missions and ability to persevere in the face of unimaginable circumstances proves that while “peacekeeping is not a soldier’s job, only a soldier can do it.” 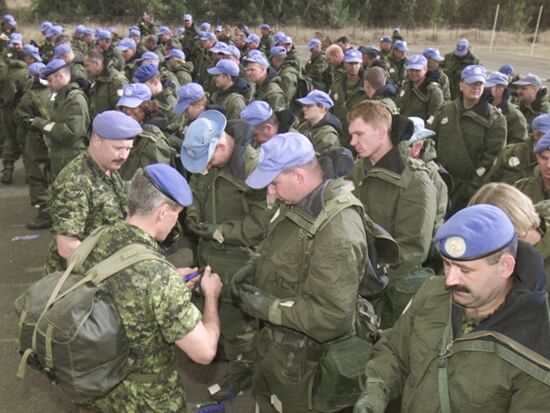 Nine of the aforementioned 15 CAF members lost in the summer of ’74 died on August 9. They became known as the “Buffalo Nine” and were carrying supplies to United Nation’s Disengagement Observer Force (UNDOF) troops stationed along the Israel-Syria border. (To learn more about the “Buffalo Nine”, see Valour Canada’s article about them HERE). The UNDOF group was tasked with creating a zone of separation along the border in an area known as the Golan Heights and their mission was to ensure that the shaky peace recently negotiated between Israel and Syria following the Yom Kippur War was not broken. Canada’s continued presence in the region makes UNDOF one of our country’s longest international commitments.

Main photo: Observation Post 73 stands on top of a hill in the United Nations Truce Supervision Organization mission area in the Golan Heights in Nov. of 2008 (Credit: National Defence).