November 8, 1942: Captain Fredrick Thornton Peters led an amphibious assault on the city of Oran, located on the western edge of the Algerian Mediterranean coast. An incredible story of bravery and duty, his is one that is rarely told, perhaps due to the failure of the operation itself.

A part of the more well-known Operation Torch, Operation Reservist was to capture intact the remainder of the Vichy France naval strength in the region: some 30 warships as well as dock facilities. This was to be done by sailing two sloops, HMS Walney and HMS Harland, directly to one of the docks in the port and disembarking their four hundred Special Forces troops. Needless to say, thirty versus two are hardly good odds, especially when the 30 has the benefit of being in the defending position, surrounded by floating barriers that obstructed any approaching enemy.

This did not dissuade Capt. Peters, however. On the bridge of the Walney, he unwaveringly led the two ships ever closer to shore amidst heavy gunfire by the French ships and shore artillery. With the rest of the bridge crew killed and blinded in one eye, he nevertheless successfully brought the Walney alongside one of the docks. As bullets and shells flew around him, he headed down to the forecastle to help with tying the mooring lines before working his way aft to tie the lines there.

Severely wounded, he remained conscious long enough to oversee the disembarkation of the men in his ship, though few had survived the trip to the dock. Falling unconscious, he was captured (along with the survivors) by the French. Two short days later, the French forces surrendered to the Allies, freeing the captured men. Tragically, Peters met an ignominious death – on his return to England, his aircraft crashed into the sea at Plymouth Sound, and he slipped beneath the waves despite the best efforts of the crash survivors.

Captain Peters was awarded the Victoria Cross by the British, as well as the Distinguished Service Cross by the Americans – the highest awards he could receive by both authorities. These are on top of existing awards he had earned in the First World War and earlier in the Second World War. 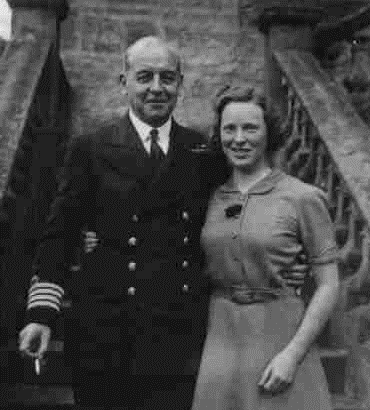 Captain Peters with his girlfriend in England (Credit: Wikipedia/Sebago).

To learn more about Fredrick Peters, visit the Esquimalt Naval and Military Museum.