September 1st, 1918 marks the beginning of the last hundred days of the First World War. Up until this point the Hindenburg Line had remained the ultimate defence of the German forces, but it would have to be cracked if the Allies wished to shorten the war. The Canadian Corps would successfully play the vital role of spearhead for the assault on the Drocourt-Quéant Line (the northernmost portion of the Hindenburg line).

During the final 100 days, 30 Canadians and Newfoundlanders would receive Victoria Crosses, six of which were awarded at the Drocourt-Quéant line on September 2nd. Captain Bellenden Hutcheson, Private John Young, Private Walter Rayfield, Sergeant Arthur Knight, Corporal William Metcalf, Private Claude Nunney and Lieutenant-Colonel Cyrus Peck performed with exceptional gallantry that day with each contributing to the initial success of the Canadian Corps in very different ways. Their separate acts of bravery include directing a tank to it’s target, recovering reconnaissance under heavy fire, single-handedly taking an objective, and aiding the rescue of wounded soldiers.

Following the Canadian success at the Drocourt-Quéant Line, the Germans would continue to be pushed backwards until war ended on Armistice Day, Nov. 11, 1918. Sir Arthur Currie would later admit that he considered those final 100 days as Canada’s finest hour.

Depicted below is the German defensive barbed wire along the Drocourt-Quéant portion of the Hindenburg Line. 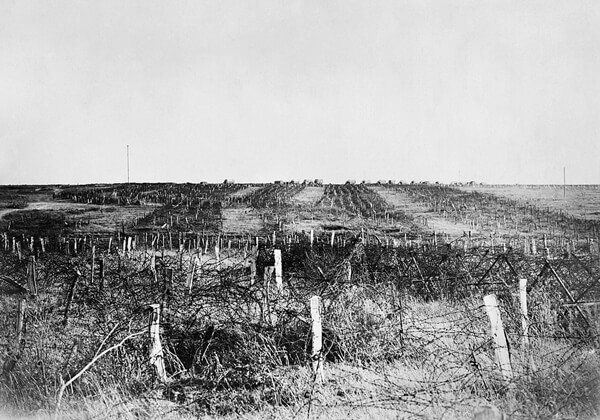 To learn more about the Drocourt-Quéant specifically, check out the Library and Archives Canada site.