In mid-summer 2017, Christopher Nolan’s blockbuster film Dunkirk was released. His movie depicts the legendary evacuation of some 338,000 British, French, and Belgian soldiers from the French beaches of Dunkirk between May 26th and June 4th, 1940. Nolan’s movie was praised as an Oscar contender early on and it does a great job of depicting British involvement in the withdrawal, however, it’s important to remember there were other contributors, including Canadians.

As shown in the movie, the Royal Air Force (RAF) played a vital role in assuring the success of the evacuation, but this was not an entirely a British contribution. In fact, the British had re-established Squadron No. 242 to house their Canadian pilots during the Second World War. Beginning on May 16th, No. 242 would be used to supply air support over France, including at Dunkirk. This operation would continue until June 16th when the entire squadron was evacuated to participate in the Battle of Britain. Without the air support from the RAF, the hundreds of thousands stranded on the beach would have most likely come under fire from Germany’s Luftwaffe pilots. 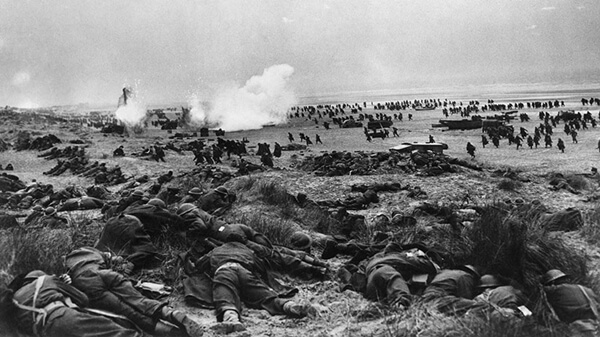 The only official Canadian military involvement at Dunkirk comes from the Royal Canadian Navy. Rear-Admiral Robert W. Timbrell began his military career as a Naval cadet with the Royal Navy but would later transfer to the Royal Canadian Navy as Canadian recruitment commenced. While continuing his naval studies in England, R-A Timbrell would find himself captain of a newly commissioned yacht named the Llanthony. The crew of Llanthony would make many trips across the English Channel to Dunkirk, making them personally responsible for saving hundreds of lives. Unfortunately, on the third or fourth trip, the vessel was struck by a bomb and several crew members were lost.

It was the brave and determined action of all involved that made the miracle at Dunkirk possible.

To read more about Timbrell and his actions on that day, click here (The Telegraph).

To learn about Canadians in Dunkirk, check out this Maclean’s article.

Main photo: The Dunkirk movie poster and a photo of the to-be-evacuated soldiers on the beach at Dunkirk (Credit: Movie poster: dunkirkmovie.com; Photo: alamy.com).