On October 16, 1962, President John F. Kennedy was informed that Soviet missiles had been installed in Cuba. It was another six days before he chose to inform his Canadian ally Prime Minister Diefenbaker. Diefenbaker perceived this delay as a personal slight and his perception directly influenced Canada’s response to the Cuban Missile Crisis. Determined to prove that Canada should have been consulted before the United States decided to quarantine Cuba, Diefenbaker refused to raise Canada’s security alert.

Among the eighty percent of Canadians who opposed Diefenbaker’s decision were Douglas Harkness, the Minister of Defence, and Maritime Commander Admiral Dyer. Defying Diefenbaker, Harkness choose to raise Canada’s security alert without government permission while Dyer took the initiative to increase the number of surveillance patrols. It was during one of these patrols that the Canadian fleet discovered a Soviet submarine five hundred miles from Halifax. This discovery forced Diefenbaker to acknowledge that the Soviet Union posed a serious security threat and to authorize Canadian involvement in the “Cuban issue.” 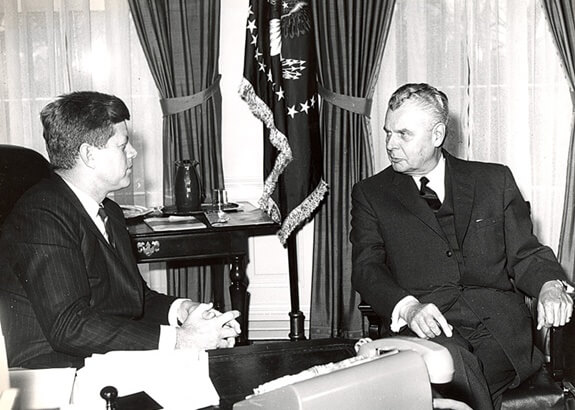 During the tense thirteen day stand-off between the United States and the Soviet Union, Canada was the only American ally to provide active military support. In addition to carrying out multiple surveillance missions, the Canadian maritime forces actively cooperated with the United States and helped monitor North American waters to ensure that Soviet submarines were not close enough to launch a missile attack on any major American cities.

Read about Kennedy and Diefenbaker in this MacLean’s article: “John F. Kennedy’s Turbulent Relationship with Canada”.

Main photo: American President John F. Kennedy and his wife Jacqueline visit Canada and meet Prime Minister John G. Diefenbaker a year before the Cuban Missile Crisis. May 1961. Note that the man in between Kennedy and Diefenbaker is veteran and Governor General of Canada, Georges Vanier. (Credit: Duncan Cameron/Library and Archives Canada/PA-154665)