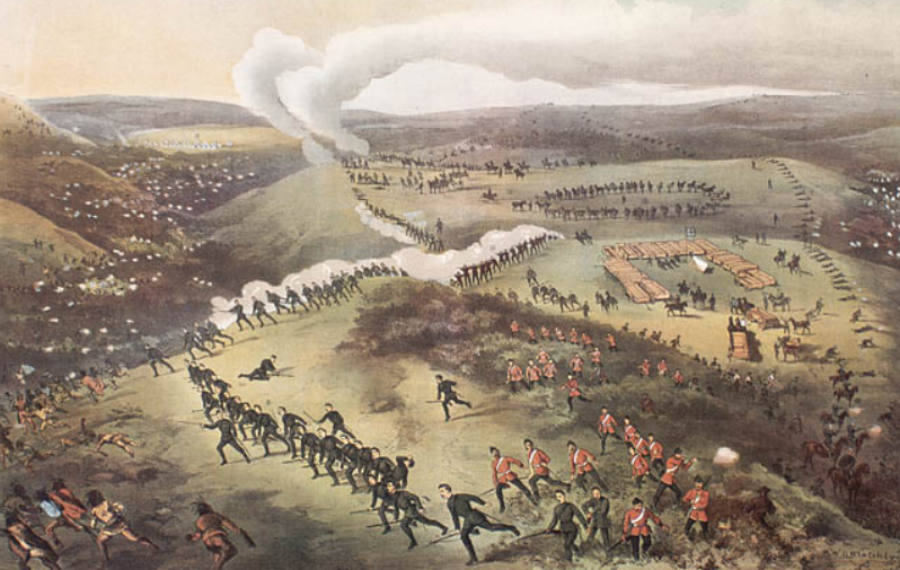 During the 1870s and 1880s, relations between the Canadian government and Indigenous Peoples deteriorated and became increasingly strained. First Nations faced unkept treaty promises and were weakened by a dwindling bison population upon which they depended for food. The Métis, feeling neglected and ignored by the federal government, sought recognition for land titles. Within this context a rebellion broke out in 1885 and thousands of Canadian soldiers and militia men were swiftly dispatched to the prairies.

Under the authority of Lieutenant-Colonel (LCol)  William Otter, a portion of the dispatched men trekked through the prairies up to Fort Battleford, Saskatchewan, with the intention of protecting the fort and local white settlers from Cree or Assiniboine attacks. Otter’s men included members of the North-West Mounted Police, the Queen’s Own Rifles, and the Battleford Rifle Company (later the 16th Mounted Rifles).

Unease set in when the Cree Poundmaker Band and the Assiniboine – on the verge of famine – came to the fort seeking food rations. Fearing conflict and violence, particularly as the some of the Assiniboine had recently murdered two white settlers, locals found protection within the palisade of Fort Battleford. Yet, Chief Poundmaker thought it more productive for First Nations to collaborate and negotiate with the Crown, rather than forcefully work against it. He hoped that by peacefully speaking to the Indian Agent he would be able to convince the government to honour their treaty obligations. The Chief was unsuccessful and some in his party looted a few abandoned homes in desperation as they left and headed west.

LCol Otter arrived at the fort shortly thereafter and, disregarding orders from General Middleton to leave First Nations people alone, he and his troops quickly departed and travelled 60 kilometres in search of the Poundmaker Band. 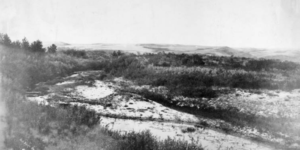 Photograph of the area where the battle unfolded, circa 1885. (Credit: Library and Archives Canada)

The next morning, on May 2, 1885, LCol Otter and his men attacked the Poundmaker Band camp. The First Nations and Métis peoples, headed by Chief Fine Day, defended themselves and confrontation ensued in the grasslands and ravines of Cut Knife Hill. As it turned out, LCol Otter was ill-equipped to face his opponents who were well-versed warriors and familiar with the terrain. Otter’s two cannons were purposeless once their rotted carts disintegrated, and his Gatling gun was unable to fire far enough to reach the opposition. As a result, the LCol’s forces were driven to leave the battlefield, marking the final defeat of Canadian forces during the 1885 North-West Rebellion. Although some Indigenous warriors were inclined to pursue Otter’s retreating force, Poundmaker discouraged further violence. The 6-hour clash left 17 men wounded and cost the lives of another 14, eight from the militia and four Cree.

The North-West Rebellion was quelled within a couple of months and its participants were prosecuted for their involvement. Poundmaker was deemed liable for generating the Battle of Cut Knife Hill and declared a traitor. He was briefly imprisoned before his death the following year at Blackfoot Crossing, Alberta. In 2019, he was fully exonerated by Prime Minister Justin Trudeau. “Chief Poundmaker was peacemaker who never stopped fighting for peace. […] [He was] someone who work[ed] tirelessly to ensure the survival of his people and hold the Crown accountable to its obligations as laid out in Treaty 6,” he declared. 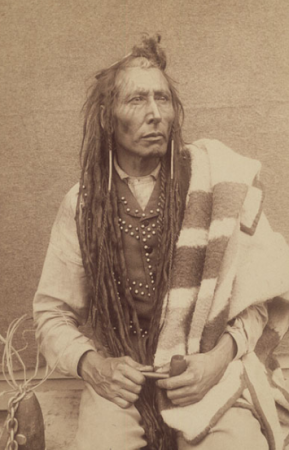 Poundmaker is now recognized for his peacemaking efforts and has been absolved of all treason charges. (Credit: Library and Archives Canada)

The battlefield was proclaimed a national historic site in 1923.

For a more complete summary of the 1885 North-West Rebellion, see the Canadian Encyclopedia.

Peter Decoteau of the Red Pheasant Cree Nation partook in the battle. Read this article to learn about the accomplishments of Peter’s son, Alex.

Main Photo: An artistic rendition of the Battle of Cut Knife. (Credit: Library and Archives Canada)