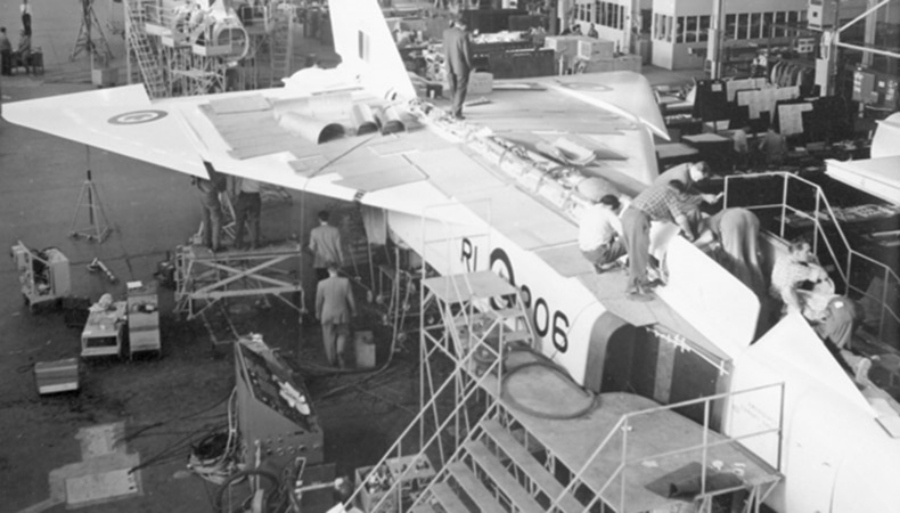 When Prime Minister John Diefenbaker unexpectedly terminated the Avro Arrow project on February 20, 1959, also known as “Black Friday”, he spurred outrage among Canadians. A protest was held in Toronto and Diefenbaker’s reputation was tarnished. How can Canadians’ enthusiasm for this project be explained?

Back in the early 1950s – in the middle of the Cold War between the United States of America and the Soviet Union (USSR) – post-WW2 rearmament figured among Canada’s priorities, so it turned to A.V. Roe Canada to replace the outdated CF-100 fighter jet. The country required a faster and more manoeuvrable aircraft because it was concerned by the possibility of Soviet bombers accessing North America via the Arctic. The Royal Canadian Air Force actively participated in the program’s development and outlined the key criteria for the new plane: speed, long-distance flying, and the ability to withstand arctic conditions.

A prototype was unveiled to an awed public in Toronto in 1957 – the Avro Arrow CF-105 was born. Twenty-six metres long with a wingspan of 15 metres, a top speed of 2,453 kilometres per hour, and a climbing rate of 15,240 metres in 4 minutes, 24 seconds – the Arrow’s technical specifications were impressive for its time seeing as commercial supersonic jets (such as Concorde) were still nearly a decade away. In addition, the Arrow was equipped with an electronic, computerized control system in lieu of manual flight controls. With this new high-tech aircraft, Canadian aviation soared to unrivalled levels of perfection. 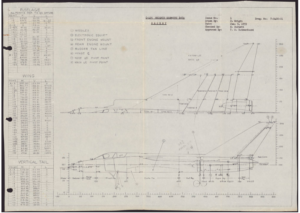 The blueprint for the Arrow. (Credit: Library and Archives Canada)

To create such state-of-the-art technology, the Arrow called for skilled engineers and technicians, who in turn brought new life, skills, and innovation into Canada’s aviation industry. The change also brought industrial growth and diversification, and created employment for thousands. The project’s virtues meant that most Canadians were undeterred by its high cost and the Arrow proved popular.

Since the program’s cancellation, numerous theories have been put forward to explain Diefenbaker’s decision. By 1959, the world was no longer the same place. The USSR had launched Sputnik and North American attention turned to the latest Soviet hazard: the intercontinental ballistic missile (ICBM). The Arrow was not suited to counter missiles and therefore was no longer adapted to Canada’s defense needs. While some have blamed American influence for the program’s halt, many have brought up the project’s astronomical cost. Not only was it problematic because it weighted heavily in the federal defense budget, but it limited the amount of funding available for ICBM development.

Once the project was scratched, Canada’s aspirations to be a leader in military aviation and technology were dashed. Approximately 25,000 people lost their jobs and many of the top engineers defected to the U.S and contributed to NASA’s Apollo Program. Meanwhile, Diefenbaker approved the development of Bomarc Missiles which turned out to be another controversial choice (see our Bomarc article).

The federal government ordered the destruction of all items pertaining to the Arrow, including the five operational prototypes, documents, equipment, and plans. Luckily however, some pieces of memorabilia have been preserved. A piece of the nose, engines, undercarriage legs and wingtips are preciously kept in the collection of the Canadian Aviation and Space Museum. 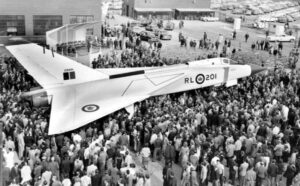 The Canadian public admires the Arrow at its unveiling in Toronto in 1957. (Credit: Toronto Star)

See this AVRO Arrow article by the Canadian Encyclopedia or explore CBC’s archives to watch excerpts of news and radio broadcasts featuring the Arrow.

Main photo:  One of the Avro Arrow project’s benefits was that it created thousands of jobs for Canadians. (Credit: Canadian Aviation and Space Museum)