Albert Mountain Horse is believed to have been the first Aboriginal person from Western Canada to enlist in the Canadian Expeditionary Force during the First World War. Even though he was one of the Canadian soldiers caught up in the German’s chlorine gas attack at the Second Battle of Ypres in April 1915, he survived the heavy fighting.

Albert Mountain Horse grew up on the Blood Indian Reserve in Southern Alberta. Named Flying Star by his mother, Mountain Horse’s early initiation into one of the Blood societies gave him the opportunity to learn about his people’s traditional way of life and to familiarize himself with his people’s past and culture. In contrast, when he turned seven, Flying Star was baptized Albert and was enrolled at St. Paul’s Residential School where his traditional braids were cut off. When he was old enough, Albert joined the Cadet Corps, and then later, attended a military school in Calgary.

When the First World War started, Albert was quick to volunteer with No. 14 Company, Canadian Army Service Corps (CASC). He then proceeded to Valcartier, QC, as part of the first contingent of the Canadian Expeditionary Force (CEF). His first action was at Ypres, Belgium, where the Germans released poison gas upon the allied lines. Although he escaped that battle without serious injury, Albert was gassed two more times in 1915. He suffered significant lung damage as a result and was kept in the hospital. Seriously ill, he was diagnosed with pneumonia and declared unfit for active duty. Sadly, his pneumonia turned into tuberculosis and Mountain Horse died three days after returning to Canada. He was only 22 years old. 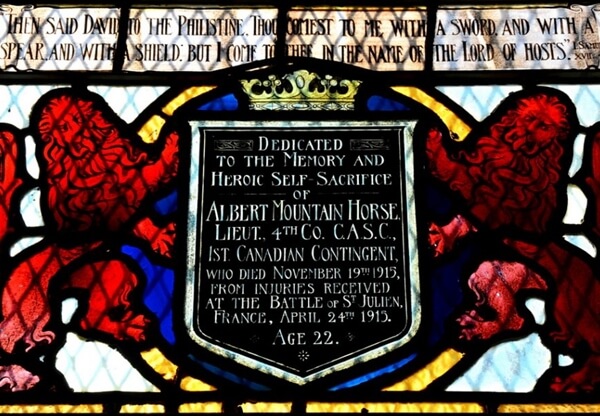 After Albert’s death, his mother blamed St. Paul’s Residential School for encouraging her son to enlist and relations between aboriginal people and the Canadian government during the First World War became increasingly strained. Albert’s two older brothers, Mike, and Joe enlisted soon after the younger brother’s death and served in France for the duration of the war.