On August 20, 1990, the Canadian Armed Forces were deployed in Oka, a small town just outside Montreal. The Oka Crisis, a seventy-eight-day standoff between Mohawk protesters and provincial law enforcement over the proposed expansion of a golf-course onto disputed land which encompassed a Mohawk burial ground, has come to symbolize the conflicting interests of the Canadian government and the First Nations people. Over four thousand army personnel were deployed to restore order to the region and to guarantee public safety.

The Canadian Armed Forces were called in on August 6 because of the escalating tensions between the Quebec provincial police and the armed Mohawk protesters. By August 20 the military had taken over the police barricades and were responsible for delivering food, medicine, and clothing to the cut-off Mohawk community. During the tense mission approximately one dozen soldiers were injured in clashes with the protesters.

On August 29, the military and the Mohawk warriors worked side by side to dismantle one of the barricades, but the Oka Crisis did not end until September 26 when the Mohawk protesters destroyed their weapons in a large bonfire and surrendered to the Armed Forces. 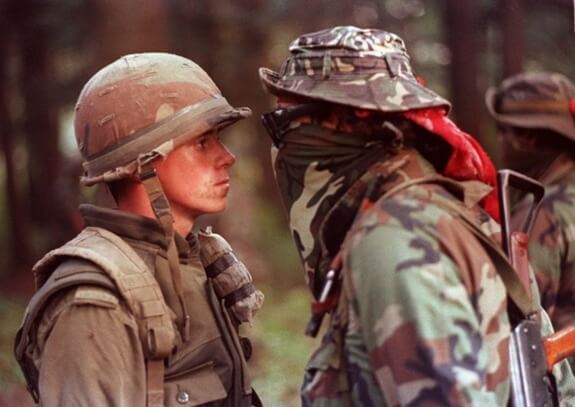