On the morning of December 6, 1917, the SS Imo, a Belgian relief ship, collided with the SS Mont Blanc in Halifax Harbour. The Mont Blanc should have been flying a red flag to show that it was carrying three thousand tons of high explosives that were destined for the Western Front. 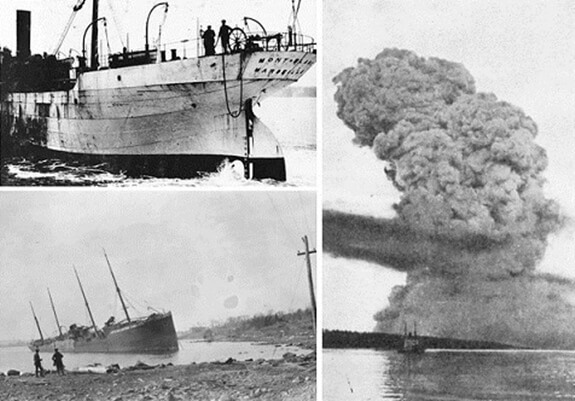 The resulting explosion killed almost two thousand people, wounded another nine thousand, and destroyed the entire neighbourhood of Richmond, Halifax’s main industrial and residential center. Soldiers recently returned from France described the explosion as worse than anything they had seen on the battlefields of Europe and J. Robert Oppenheimer, the director of the Manhattan Project, would later study the explosion in order to predict the effects of the atomic bomb.

Nova Scotia’s American neighbors rushed to help and within 48-hours American Emergency Relief teams from the state of Massachusetts had descended upon the “Shattered City” of Halifax. They quickly set up temporary hospitals and distributed emergency supplies donated by altruistic Bostonians. It was at one of these hospitals that John Johnson, the helmsman of the SS Imo was arrested and accused of being a German saboteur. While these charges were quickly dropped and forgotten, Nova Scotia has never forgotten Massachusetts’s support. Every year a single tree from Nova Scotia is sent to Boston to serve as the city’s official Christmas tree.

To read about a tree with embedded metal shards, see this Maclean’s article: “A century after the Halifax explosion, grim reminders can still be found in trees”.

Browse the Canadian Encyclopedia for a thorough account of the Halifax explosion or visit the Maritime Museum of the Atlantic in person to see their exhibit.