The FLQ Crisis, the most serious terrorist attack on Canadian soil in the country’s history, was kicked off on October 5, 1970, when British Trade Commissioner James Cross was kidnapped from his home by members of the separatist Front de Liberation du Quebec. When Pierre Laporte, Quebec’s Vice-Premier and the Minister of Labour, was kidnapped a few days later (Oct.10), Prime Minister Pierre Trudeau responded by having a thousand troops deployed in Ottawa to ensure the safety of other government employees.

Even though the Canadian Armed Forces had been monitoring FLQ activities since the mid-1960s, their role in anti-FLQ terrorist operations was limited. Apart from one young soldier who infiltrated several FLQ cells, anti-terrorism operations were left in the hands of the police. However, following the radicalization of the FLQ in 1970 and their development of more sophisticated terrorist strategies, the Quebec police found themselves frightened and overwhelmed.

On October 15, the Quebec provincial government officially requested that the Canadian Armed Forces be deployed in Montreal. In less than a half an hour, another thousand troops were racing down the highway in transport vehicles. The presence of the troops on the streets of Montreal was mainly intended as a symbolic display of force, to reassure the public, and to free up police resources.

James Cross was found in December and negotiations for his release were successful. Laporte was killed by the FLQ on Oct.17; his murderers, Paul Rose and Francis Simard received a life sentence for their deed. 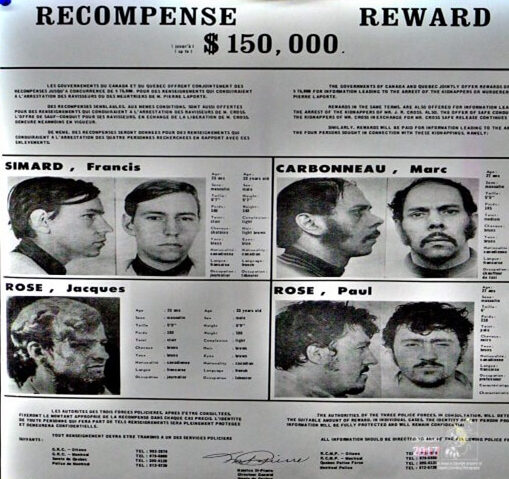