July 24, 1943 marked the beginning of a week-long coordinated attack on Germany’s second largest city, Hamburg. Over the course of seven days, ten thousand tons of bombs were dropped on Hamburg and an estimated 40,000 German civilians were killed. One of the main goals of the mission, code-named Operation Gomorrah, was the destruction of the public morale.

Operation Gomorrah was a joint British-American campaign in which German civilians were deliberately targeted. While the Americans carried out daylight precision attacks on Hamburg’s industrial factories, the British Royal Air Force (RAF) preferred to attack at night and consciously targeted the city center. 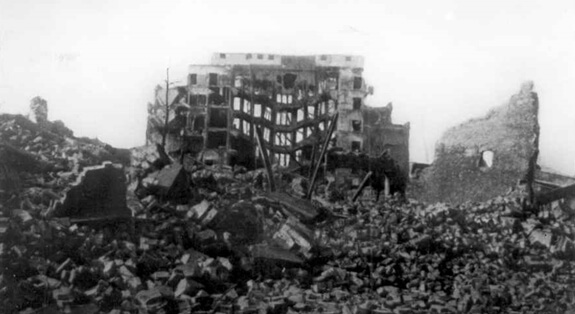 Thousands of Canadians served with the RAF throughout the course of the Second World War and many took part in the destruction of Hamburg. Among the Canadians who bombed Hamburg was RCAF Squadron 420, The Snowy Owls.

To learn more about the Snowy Owls and their history, check this out.

View the sobering animated map (below) that shows the intensifying air missions (aerial bombing by the Allies) throughout the Second World War.

A few things to note:
– the slow start and the flurry of activity in ’44 and ’45
– that Great Britain (RAF) was basically fighting the aerial war on its own during the war’s first few years
– the bombing of Sicily pre-Operation Husky (’43)
– the following progression north over the Italian peninsula
– the ever-tightening enclosure around central Germany