Night, October 21/22, 1944: Private Ernest Alvia “Smokey” Smith earns the Victoria Cross in Italy. A member of the Seaforth Highlanders and born in New Westminster, BC, he was the only Canadian Private in the Second World War with that prestigious award.

Leaving the team’s PIAT behind with one of the three members, he and the remaining soldier (Pvt. Tennant) made their way across an open field to acquire a more advantageous position from which to recon and attack the enemy. The two crossed a road and managed to find another PIAT.

Almost immediately, one of the German tanks spotted the two and fired, injuring Tennant. Despite the mass of steel and wall of machine gun lead bearing down on him, Smith moved into firing position with his PIAT, firing it from a distance of merely 10 metres. The tank was disabled, but the German soldiers riding on its back dismounted, rushing Smith.

Smith didn’t waver, and armed with only his Thompson submachine gun, fired and killed four of the enemy soldiers, forcing the rest back.

One of the other Panthers took notice, as did the rest of the German infantry. Firing and moving in on Smith, it was a losing prospect…for the Germans.

Finding more ammo magazines in the ditch along the road, Smith held his position, defending his wounded partner and driving the Germans back once more. The Germans having wizened up, they fired on Smith from out of the latter’s range, but this didn’t prevent Smith from dragging his friend to safety. That accomplished, he moved BACK to the road, where he awaited a potential attack. None were forthcoming, thankfully, and the bridgehead’s establishment proceeded unimpeded.

By the end of the fight, one Panther and both self-propelled guns had been destroyed, despite the Canadians’ lack of available armour support. Smith would survive the war, and live a long life, passing in 2005. He received a funeral parade, his body lying in state in the House of Commons, and his ashes eventually scattered into the Strait of Georgia. 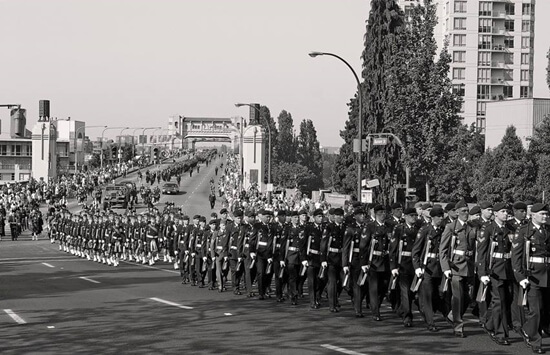 To learn more about Ernest Smith’s life check out the National Defence website.

To read an interview with Smokey about his time in the war, check out Macleans.

Make an online visit to the Seaforth Highlanders of Canada Museum HERE.