On September 1, 1944 Sgt. Tommy Prince of the Brokenhead Ojibway Nation carried out one of his most daring actions. A year after the 1943 Kiska landings, Prince and the joint US-Canadian First Special Service Force (FSSF, aka the Devil’s Brigade) were now on the other side of the globe, having landed in southern France as part of Operation Dragoon.

That day, Prince and his reconnaissance partner trekked 24 kilometres behind enemy lines with the aim of scoping out German outposts, gun emplacements, and camps. On their way back through the mountainous terrain, they came across a squad of Free French Partisans (FFP) that were being surrounded by a German platoon.

The math certainly did not favour the Partisans, who were probably outnumbered three or four to one. It is difficult to see how a mere two men could change these odds.

But that did not stop Prince and his private. Taking up sniping positions, the two men started firing at the Germans, with Prince killing six and injuring more. Shocked by the sudden and high casualties all around him, the German commander called for his troops to retreat, leaving behind the FFP.

After greeting the Partisan leader, Prince was asked where the rest of his troops were. He replied, “Here,” pointing to his partner. The French officer was shocked: “Mon Dieu! I thought there were at least fifty of you!” 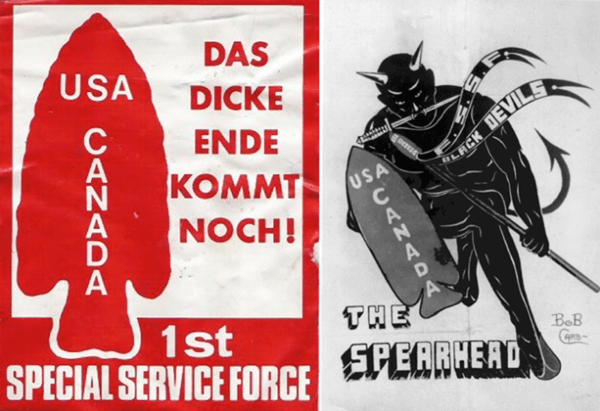 First Special Service Force card (left) and Black Devils (right). Note 1: “Das dicke ende kommt noch” translated to English “The worst is yet to come”. These cards were left where the enemy would find them. Note 2: The spearpoint is the FSSF’s shoulder patch (Credit: The Album).

Two days later, Prince and the group returned to the US-Canadian lines and successfully delivered the gathered intelligence to their command. Walking some 80 kilometres over the last five days, he was credited with ensuring the smooth advance of the Devil’s Brigade on September 5. For this deed, Prince was awarded the US Silver Star. Combined with his reception of the Military Medal, this put him in the elite company of only two other Canadians.

Prince’s post-war veteran’s benefits were far from the same standard that other soldiers received in Canada, which highlighted the disparity between Aboriginal Peoples and non-Aboriginal peoples. Much like Corporal Pegahmagabow of the previous generation, Prince encountered significant difficulties in trying to carve out a role for himself in civilian life. Although he ran a successful cleaning company for a short time, he realized this was a poor position from which to advocate for greater Aboriginal Canadian respect in the country

But before much could be done in that regard, the Korean War began and the call to arms once again attracted Prince, who immediately joined the newly-raised 2nd Battalion, Princess Patricia’s Canadian Light Infantry (2 PPCLI). Although he performed and led magnificently – including at the Battle of Kap’yong – a severe case of arthritis in his knee caused him to be sent home to carry out training duties. Hardly content with this role, he loudly and frequently complained about wanting to go straight back into battle. He soon got his wish, joining the 3rd Battalion, Princess Patricia’s Canadian Light Infantry (3 PPCLI) in October 1952. But battle exhaustion accumulated since the Second World War and put him out of action once more. He was discharged back to Canada.

Though never formally diagnosed with it, he exhibited signs of PTSD (Post-traumatic Stress Disorder). In the 1950s there were very few attempts at addressing this issue.

The rest of his life was split between the mean streets of Winnipeg and the Brokenhead Reserve. Regardless of his service to Canada, he faced constant discrimination from non-Aboriginals at the workplace. Alcoholism and his psychological demons took their toll. The former he succeeded in beating, but the latter persisted until his death in 1977 at the Deer Lodge Hospital for Veterans.

May his service and sacrifice never be forgotten. 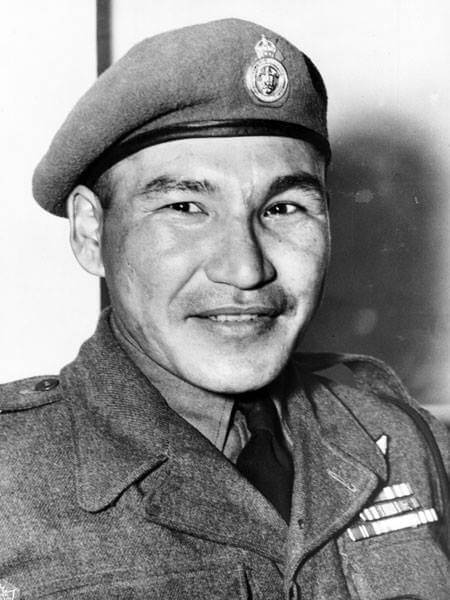