August 1, 1963: The first two CH-124 Sea King maritime helicopters arrive at Canadian Forces Base Shearwater, Halifax. For over 50 years, the Sea Kings, though much maligned in popular media for their rate of incidents, provided unwavering and extremely versatile service for the Canadian Forces.

Built primarily for anti-submarine warfare (ASW), the Sea Kings were deployed on everything from HMCS Bonaventure (our last aircraft carrier) and the converted ‘50s destroyers, to the venerable Preserver and Protecteur replenishment ships. Their durability was legendary – perhaps best illustrated when one was sucked up in a waterspout (basically, a tornado over water) as it took off from Bonaventure and came out at the top of it unscathed.

But as the Cold War came to an end, Canada’s navy received new roles. No longer were its operations constrained to just the North Atlantic and submarine-hunting. Canada’s military, and its Sea Kings, now had to be ready for world-wide operations of unprecedented scope.

The Sea Kings’ first test came when Canada decided to participate in the 1990 embargo against Iraq. Six Sea Kings rapidly had their ASW equipment swapped out for equipment more suited to the arid heat and land-centric combat environment of the Middle East – the dipping sonar and associated gear were taken out, their weight replaced with night-vision equipment, forward-looking infrared sensors, flare dispensers, GPS receivers, and machine guns. Much to the credit of the technicians who worked on the project, all of this was completed in the 10 days between the announcement of Canada’s participation and the departure of the Canadian Navy task force. Parts had to be sourced and delivered through varied unorthodox methods: apparently, one of the smaller items was flown from Ontario to Halifax by a CF-18 Hornet. 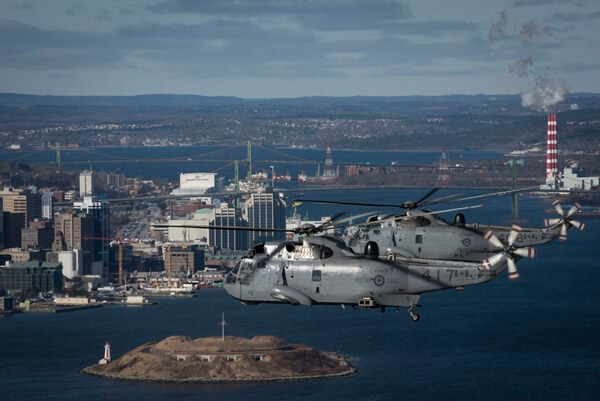 The success of this ad-hoc refit made the Sea Kings an unexpectedly versatile aircraft. No longer were they just “Sea” Kings – in the Middle East/North-eastern Africa they became affectionately known as “Sand” Kings after their participation in famine relief efforts in Somalia 1992-1993. There, they not only delivered record amounts of aid supplies, Sea King crews also learned to provide combat support for Canadian and American land forces – despite the crews’ complete lack of land warfare training. Shot at by enemy ground fire, Sea King pilots had to conduct evasive manoeuvres, which was not something they were trained for: after all, Soviet submarines did not have surface-to-air weapons.

But the Sea Kings were getting older. While all their “bugs” were being worked out and new uses found for them, their age made formerly adequate parts a liability. In 1994, a frayed fuel line leaked and exacerbated a fire onboard a Sea King flying in New Brunswick: it perished in a fiery crash. Over the last 50 years, mishaps and crashes caused the deaths of ten.

Despite the incidents, however, the Sea Kings have overall provided an extremely valuable service to the country. But all of it was only made possible by the thousands of people who helped to keep the helicopters flying, and this 50th anniversary should be an opportunity to recognize them for their incredible efforts.

Read our other article about Canada’s Sea Kings HERE.