When the first Canadian peacekeeping contingent was posted to Cyprus in 1964 they expected that their mission would only last 90 days. In actual fact, Canada’s mission on Cyprus lasted from 1964 to 1993 and over 25,000 Canadians served on the island. Twenty-eight of them lost their lives over the course of Canada’s thirty-year mission there making it the second deadliest peacekeeping mission in our country’s history.

In 1974, fifteen years after being granted independence from British rule (1960), Cyprus found itself engulfed in a violent civil war after a political coup d’état was initiated on July 15 by Greek Cypriots who favoured unification with Greece. 5 days later, Turkey invaded the northern part of the island to defend Cyprus’s small Turkish minority (July 20, 1974). Canada’s response to this crisis became known as Operation SNOWGOOSE.

Fierce fighting broke out across the island following the Turkish invasion and Canadian peacekeepers found themselves struggling to prevent the airport in Nicosia from being captured by the Turkish invaders. In response to the Turkish invasion Canada rapidly augmented the number of peacekeepers it had on the ground. After a month of fierce fighting a ceasefire was finally negotiated and the island was divided in half. Seventeen Canadians were injured during that portion of the fighting and three lost their lives before the ceasefire was negotiated. 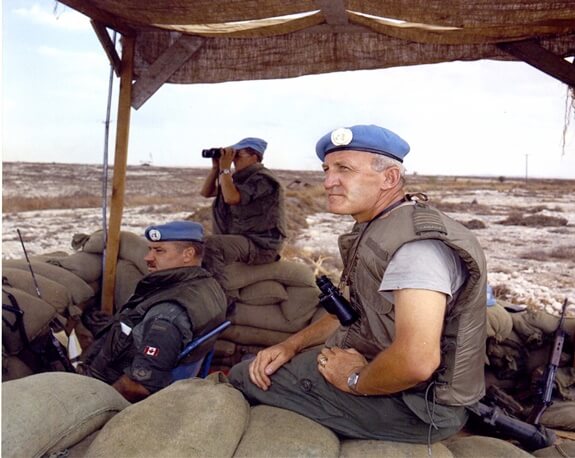 To learn more about Canada’s peacekeeping in Cyprus and Operation Snowgoose, past and present, please see Forces GC: Operation SNOWGOOSE.