The Canadian assault on Verrières Ridge, code-named Operation Spring, is one of the most controversial operations in Canadian military history. On July 25, 1944 the Black Watch, an English-speaking battalion from Montreal, suffered over three hundred casualties in a single day. The actions of twenty-six-year-old Major Frederick Philip Griffin stand at the center of the controversy.

Described as “a brilliant officer of absolutely outstanding courage and ability,” junior company commander Griffin was placed in charge of the battalion after his senior commanding officers were caught in a barrage of enemy machine gun fire while preparing for the second phase of the attack on the ridge in Normandy, France. Griffin had no choice but to scramble to reorganize his battalion and prepare for their role in the upcoming advance. The loss of the Black Watch’s senior commanding officers proved that the battalion’s start line had not been secured and meant that Griffin had to delay the second phase of the attack. It is unclear whether Griffin chose to continue with the advance despite the fact that Phase One had been unsuccessful or whether high command ordered him to do so. What is known is that at 0930 Griffin and the Black Watch advanced on Verrières Ridge after being told that they would have tank and artillery support. Unfortunately, the tanks never arrived and as the Black Watch advanced, they encountered heavy enemy fire. 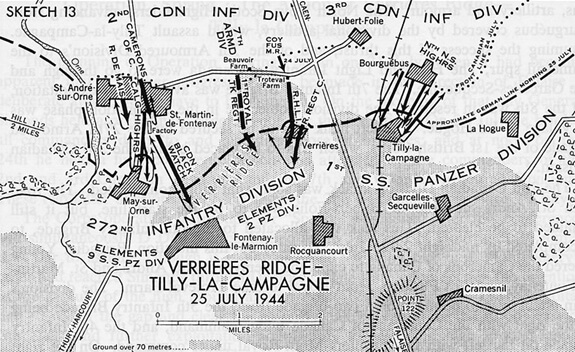 A map of the operation (Credit: Weapons and Warfare).

Only a fifth of the battalion made it to the top of the ridge where a well camouflaged enemy position was discovered. The surprised Canadians saw that enemy tanks and self-propelled guns had been hidden in haystacks; Griffin had no choice but to order a retreat.

Griffin’s body was discovered several days later surrounded by his fallen comrades. His last action as an officer was to send a message to the Black Watch’s support company telling them not to send reinforcements, “we have too many men trapped here now.”

According to the official records, the Black Watch recorded 307 casualties over the course of 4 days, but since the unit was only in action on the 25th, it is most likely that the record shows the quantity from only that single controversial day. If that hypothesis is in fact true, the loss experienced by the Black Watch is among the worst of any Canadian unit during the Second World War. Taking a total count of casualties from all of the Canadian units show that Operation Spring was only topped by the Dieppe Raid when evaluated in terms of Canadian losses from a specific WW2 operation. 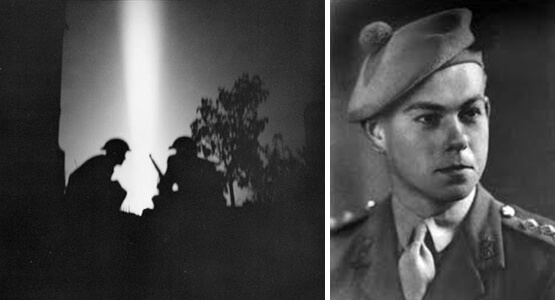 To learn more about Operation Spring, check out Investigating the Memory of Operation Spring (Canadian Military History 2012:21-2, pp. 21-32) or read The Toll of Verrières Ridge (Legion Magazine, May 1, 1999).

Another very detailed summary of the entire event, including the lead-up and aftermath, can be read at CanadianSoldiers.com: Verrières Ridge – Tilly la Campagne.