Operation Husky, the allied invasion of Sicily, began shortly after midnight on the morning of July 10, 1943, when the transport ships carrying allied troops dropped anchor seven miles off the Amber Coast. Canadians were not originally scheduled to participate in the invasion and it required the personal intercession of Prime Minister Mackenzie King before Britain reluctantly invited Canadian troops. After a month long voyage from Scotland through U-boat infested waters, the Canadians were eager to see action.

The voyage was especially tense for Royal Canadian Regiment (RCR) Captains Ron Liddell, Strome Galloway, and Ian Hodson. The regiment was in need of another Major, but unable to decide which of his captains was most deserving of promotion, Lieutenant Colonel Crowe decided to hold a competition: whoever he felt performed better in the Sicilian invasion would be promoted. Lieutenant Colonel Crowe was killed in action during the Battle of Nissoria before a decision was made. 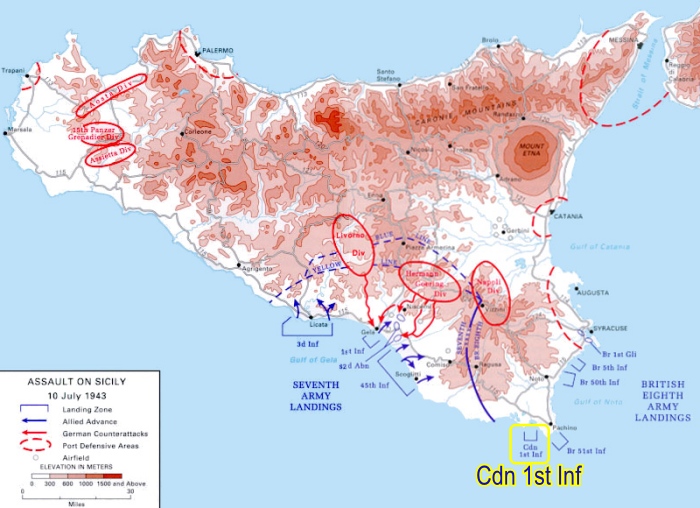 A month after their landing in Sicily, the Allies had successfully liberated the island and were preparing for an invasion of the Italian mainland. Up to that point, the Canadian losses were 2,300 casualties and 562 deceased. Although the soldiers who participated in Operation Husky are sometimes referred to as the ‘D-Day Dodgers’, their actions, very importantly, helped gain a strong mid-Mediterranean foothold that would better secure the sea lanes for Allied shipping and eventually facilitate the overthrow of Mussolini.

View the sobering animated map (below) that shows the intensifying air missions (aerial bombing by the Allies) throughout the Second World War.

A few things to note:
– the slow start and the flurry of activity in ’44 and ’45
– that Great Britain (RAF) was basically fighting the aerial war on its own during the war’s first few years
– the bombing of Sicily pre-Operation Husky (’43)
– the following progression north over the Italian peninsula
– the ever-tightening enclosure around central Germany