Matron Margaret Marjory Fraser, from New Glasgow, Nova Scotia, was a nursing sister working aboard the Canadian hospital ship HMHS Llandovery Castle when it was torpedoed and sunk by the German U-Boat U-86 on June 27, 1918. The loss of Llandovery and 234 people on board would have been enough to have many Canadians up-in-arms, but once it was learned that U-86 used its guns to dispatch those in the remaining lifeboats, the event became a rallying cry for Canadian troops.

Matron Margaret Marjory Fraser – she was known as “Pearl” to many of her peers – was the daughter of Nova Scotia’s then Lieutenant Governor. Within 2 months of the beginning of the First World War, 30-year-old Fraser had enlisted with the Canadian Army Medical Corps (September 28, 1914), and before the end of October, she was serving in England, then quickly thereafter in France as part of the No.2 Canadian Stationary Hospital (CSH).

(A few interesting facts about the No. 2 CSH: it was the first Canadian unit to operate in France (even before the PPCLI arrived) and its members received a 1914 Mons Star in recognition of their service in this regard. Also, the hospital was located in Le Touquet, near Ypres, and treated Canadian soldiers wounded in the April 1915 battle that saw the enemy’s first use of poison gas, i.e. chlorine at the 2nd Battle of Ypres.) 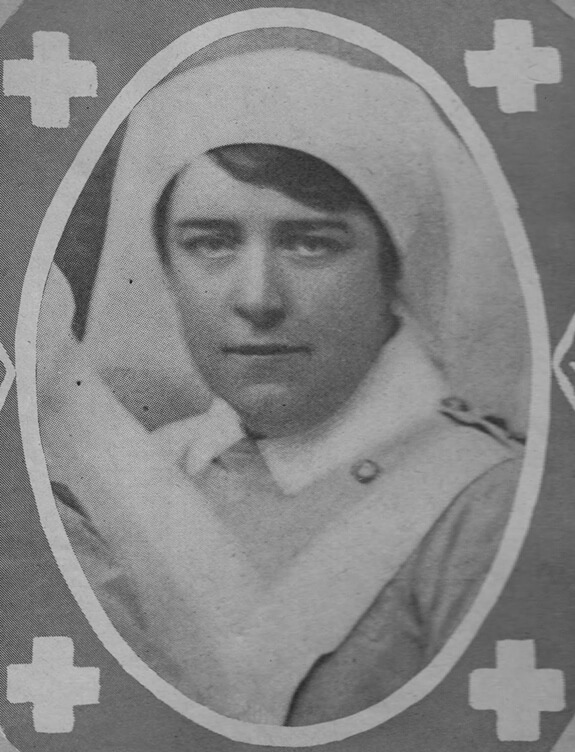 During the war’s middle years, Fraser’s ability, not only as a nurse but also as a leader, was recognized by her superiors. This resulted in her being transferred to the King’s Red Cross Special Hospital in England in July 1917 and promoted to the rank of Matron, a title that she retained even as she was assigned to HMCS Llandovery Castle in March 1918. The title Matron was a term taken from the British system that ranked nurses and was relatively equivalent to the rank of Major in the fighting forces. A Matron is recognized as being the senior nurse or head of the nursing staff. Put simply, Matron Fraser was the boss.

The sequence of events on that fateful June day in 1918:
Llandovery Castle was returning to Britain after having dropped off hundreds of injured soldiers in Halifax when it was torpedoed by German U-boat 86. As the hospital ship quickly sank, some of the crew managed to board lifeboats. Matron Fraser was one of them, but her lifeboat, like most of the others, was drawn into the whirlpool created by the sinking ship. In her last moments, Matron Fraser said to the man beside her, a Sergeant Arthur Knight who survived the event to tell this tale: “Sergeant, do you think there is any hope for us?” Knight replied, “No”, and later wrote in his diary that the last he saw of Nursing Sister Fraser was as she was thrown over the side of the lifeboat as they entered the whirlpool.

Only 5 of 239 people originally aboard the ship survived. 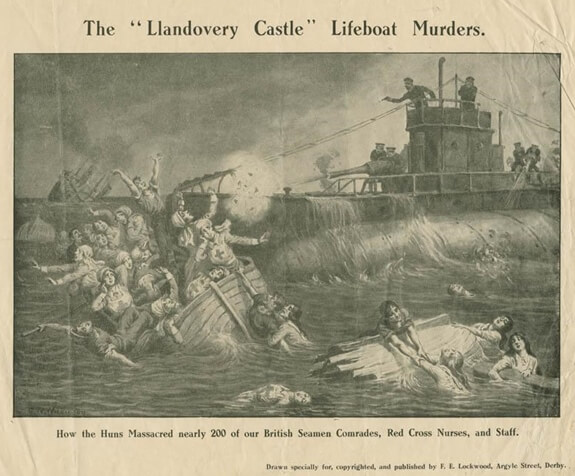 “The ‘Llandovery Castle’ Lifeboat Murders”: an artistic representation of the aftermath of the hospital ship’s sinking (Credit: Imperial War Museum).

Most often we think of the soldiers directly involved in the fight at the front and how they must have suffered, but we should never forget the tens and hundreds of thousands who served behind the scenes and who were also impacted and scarred very deeply. Nurses were among those who were not at the Front but were almost always on-duty. Their part was not an easy job by any means. As exposure to the tragedy of war increased, many began to “have breakdowns . . . ending their shifts with tears streaming down their faces, terrible insomnia, obviously what we now would call post-traumatic stress” (Credit: Stephanie Martin). We must always remember that Canadian Nursing Sisters played a huge role during the First World War. Almost 3,000 served, and of those, 61 died.

Matron Margaret Fraser is buried at the Halifax Memorial in Point Pleasant Park, Halifax, Nova Scotia. Her youngest brother (James) had died in battle just months before Llandovery was sunk, and yet Matron Fraser did not give in. She persevered until the very end. Her other brother, Alistair, survived the war and followed their father’s footsteps by becoming Lieutenant Governor of NS for a stint in the 50’s. 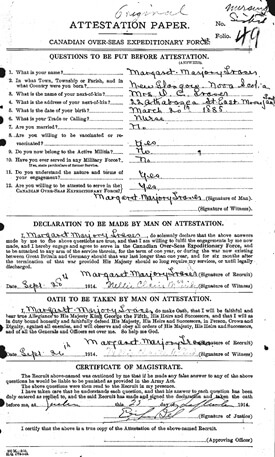 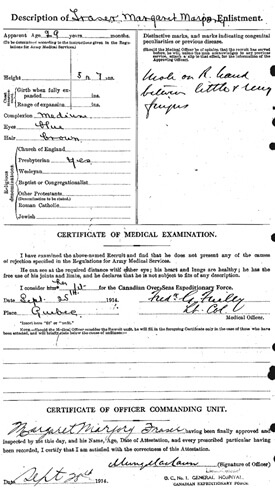