Many people have risked their lives to protect our country over the years, but not all of them have been treated as they should. Masumi Mitsui is one of those mistreated heroes. Born in Tokyo, Japan, Mitsui migrated to British Columbia with his family in 1901. Here they would live a relatively normal life until the First World War broke out and caused everything to change. Determined to do his part to protect his new home, Mitsui would leave his family to enlist in Calgary, Alberta.

Mitsui fought bravely during the First World War and eventually reached the rank of Sergeant. This promotion gave him the responsibility of leading a platoon during the Battle of Hill 70 on August 15th, 1917. It was here that Mitsui would become one of two Japanese Canadians to be awarded the Military Medal during the war. Sadly, of the 35 men in Mitsui’s platoon, only 4 would survive, including himself.

He would later return to Canada and pick up where he left off in his relatively normal life, but unfortunately this normality would only last until the outbreak of the Second World War. At that time, Japanese Canadian citizens were reclassified as enemy aliens and sent to internment camps across the country. Mitsui and his family were no exception and they were soon forced to report to a camp in the heart of British Colombia. As Mitsui and his family arrived at the camp’s Security Commission Office, he cast aside his medals and demanded to know “What good are these?” but to no avail.

Sergeant Masumi Mitsui and his family are just one example of the 21,000 Japanese Canadian citizens that would experience this horrendous discrimination during the Second World War. 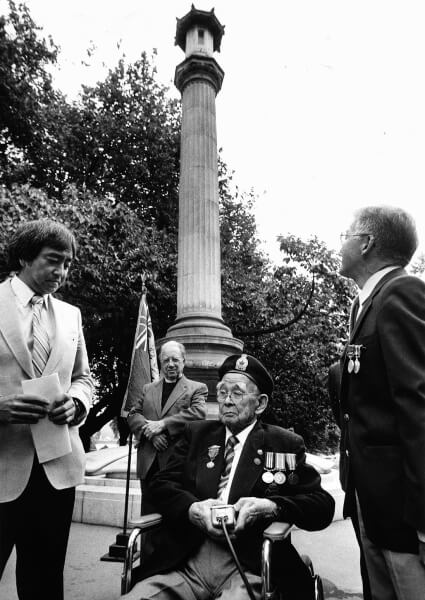 Masumi Mitsui in Vancouver for the re-ignition of the flame on the Japanese WWI Memorial (Credit: Vancouver Sun).

To learn more about Masumi Mitsui’s life, check out The Bulletin.