Lancelot Bertrand was likely the first Black officer in the Canadian Expeditionary Force, commissioned on 21 August 1916. Born in Grenada, he served two years in the Grenada Volunteers. In Canada he served as a clerk. Bertrand was one of a few Black men who were able to enlist at Valcartier in September 1914, serving in the 11th Battalion as part of the first contingent. He went to France with the 7th Battalion where he was badly wounded in the right shoulder on 25 May 1915. Sent to recover in England he served at the headquarters section of the Canadian Signal School at Shorncliffe in July. With his clerical abilities, a trade that was in short supply, he was appointed a sergeant in charge of the pay section. Here his leadership abilities were noticed. A year later on 21 August 1916, he was commissioned as a lieutenant. Lieutenant Bertrand returned to France on 21 September 1916 to rejoin the 7th Battalion. His first major battle was the Battle of Vimy Ridge on the morning of 9 April 1917. The battalion faced fierce opposition. When all the other officers in his company were killed or wounded, Lieutenant Bertrand led the soldiers onwards to take their objective. For these actions he was awarded the Military Cross. His next major battle was at Hill 70 on 15 August 1917. During the intense fighting Lieutenant Bertrand was killed; his body was never recovered. 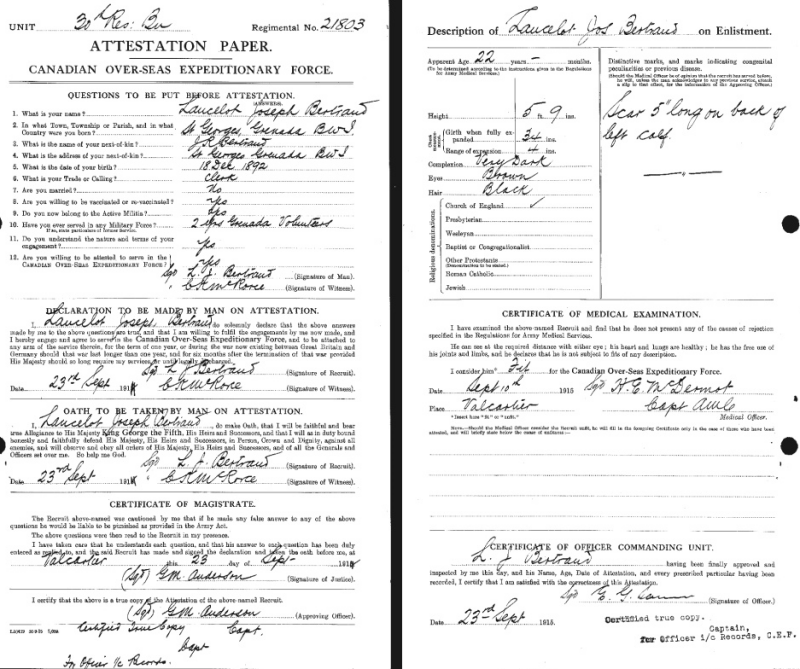