It is estimated that nearly 300 Chinese Canadians served in World War I (WWI). Brothers Wee Tan Louie and Wee Hong Louie are remembered for their sacrifices and accomplishments during the war. Though the brothers were from Shuswap, B.C., they were not full and equal Canadian citizens because governmental policies prevented Chinese Canadians from obtaining full citizenship and voting rights. Furthermore, these policies exempted Chinese Canadians from conscription during WWI. However, that did not stop either brother from volunteering to serve, no doubt fighting for their rights in Canada as much as they fought against the enemy overseas.

Wee Hong was born in 1894 and enlisted in the spring of 1917. He started as a gunner before transitioning into a career as a wireless operator. He finished his military career as a driver. For his service, he received both the British War Medal and the Victory Medal.

Wee Tan attempted to enlist in B.C., like his brother, but was denied the opportunity due to his Chinese heritage. Undeterred, Wee Tan purchased a horse and embarked on a three-month, mid-winter journey from Kamloops to Calgary to attempt enlistment for a second time. He successfully joined the 10th Battalion, Canadian Expeditionary Force, in February, 1918. By April, he was on his way to Europe and, shortly thereafter, served as a runner in France and Belgium. Runners delivered messages among the troops and were often subject to demanding battle conditions and dangerous situations. Wee Tan suffered injuries and permanent hearing loss as a result of his service and exposure to shellfire. 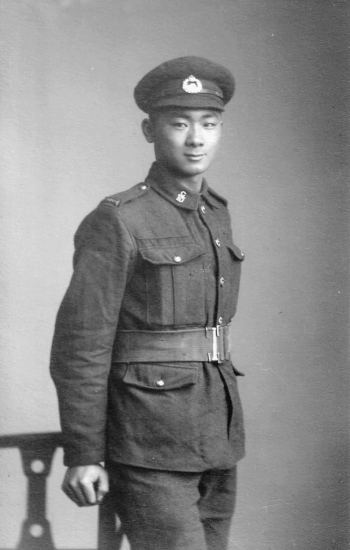 In March 1919, Wee Tan was honourably discharged from the Army. Like his brother, he also received the British War Medal and Victory Medal. He lived the rest of his days mixed between Shuswap and various west-coast, U.S. cities, often working as a taxi driver.

Upon returning from the war, Wee Hong attempted to operate a radio repair shop in Canada but was denied a business license because of his ethnicity. These discriminations stemmed from policies outlined in the 1923 Chinese Immigration Act. In response, Wee Hong mailed his army uniform and medals to Prime Minister Mackenzie King along with a written letter arguing against the injustice. Mackenzie King sent an apology letter and granted Wee Hong his business license. He ran his radio repair shop until 1976. 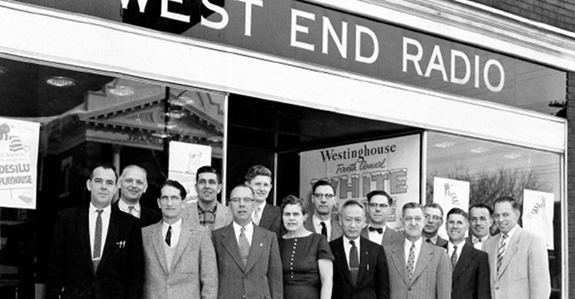 Wee Hong Louie (seventh from right), is pictured outside West End Radio, his downtown shop. Louie sent his war medals and uniform to Prime Minister Mackenzie King in protest after he was initially denied a business license (Credit: Simcoe).

To learn more about the Louie brothers, read “B.C.’s Louie brothers were among 300 Chinese-Canadians who fought in the First World War” (Postmedia’s The Great War website).