On the evening of April 13, 1945, two French-Canadian snipers silently advanced on the Dutch city of Zwolle. They had been ordered to gauge the size of the German garrison stationed there and to contact the Dutch underground. Shortly after midnight Corporal Welly Arsenault was killed by enemy machine-gun fire outside the city and an enraged Private Leo Major rushed the German position. To avenge the death of his friend he decided that he would singlehandedly liberate Zwolle.

By all rights Leo Major’s war should have been over when he was partially blinded by a phosphorous grenade during the D-Day invasion. However, he refused to be invalided back to England and persuaded his commander that snipers only needed one good eye. After Arsenault’s death, Major infiltrated Zwolle and contacted the Dutch underground. With their help, he was able to convince a German officer that the city was surrounded by thousands of Canadian troops and by the following morning, the German garrison stationed in the city had vanished.

Almost eight thousand young Canadians, including twenty-five-year-old Welly Arsenault, sacrificed their lives to liberate the Netherlands; the Dutch people have never forgotten this sacrifice. Every year thousands of tulips bloom in Ottawa, a gift from the Dutch government, and Dutch schoolchildren are taken to Commonwealth War Graves Commission cemeteries to learn about the Canadians who sacrificed their lives for Dutch freedom. In Zwolle, repeated tales of the one-eyed Canadian sniper who liberated the city from Nazi tyranny have turned Leo Major into a household name. 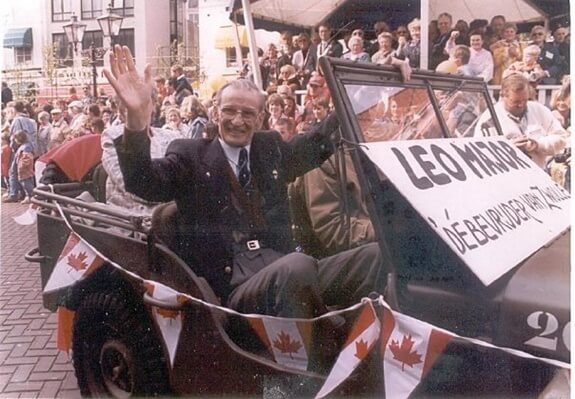 Leo Major in his later years at a celebration in Zwolle (Credit: Dutch Letters).

To learn more about Leo Major and his life, please see this article from Owlcation.