When thinking about the Second World War, Canadians often understand it as a conflict that did not occur in North America, but that is not entirely true. On September 25th, 1942, the Royal Canadian Air Force’s Home War Establishment (HWE) would participate in the Kiska Air Battle over Alaska. The HWE would shoot down an enemy aircraft here making it the sole Japanese plane to be downed over North American.

It all began on May 5th, 1942, when an intelligence unit obtained information of two impending Japanese attacks: one set to strike at Midway Island and the other aimed at the Aleutian Islands in Alaska. Although the HWE had originally been established to solely protect Canada and its borders, a mutual assistance treaty with the United States was signed and allowed for joint protection over the two countries.

The Midway attack on June 4th proved to be a failure for the Japanese, but that would not stop their future offensive plans. Alaska would be hit only two days later and by the 7th of June, Admiral Boshiro Hosogaya and the Japanese had captured Kiska and Attu islands.

In response to those attacks, RCAF Squadrons, No. 8 (Bomber-Reconnaissance) and No. 111 (Fighter) were deployed in a supporting role and would reach Fort Richardson, near Anchorage, by June 8th. It was not long before Squadron No. 118 (Fighter) joined them there as well. Although the HWE was now in place, it would be almost 4 months before a counter-attack would materialize.

Finally, on September 25th, 1942, the U.S. and Canadian Air Forces attacked the Japanese held Island of Kiska. The initial bombing raid was highly successful and left Japan with only two flight-ready Rufe fighter planes at that location. During the ensuing aerial clash, Squadron Leader K.A. Boomer would successfully shoot down one of those enemy aircraft, making it the only recorded kill for the HWE in the Second World War. 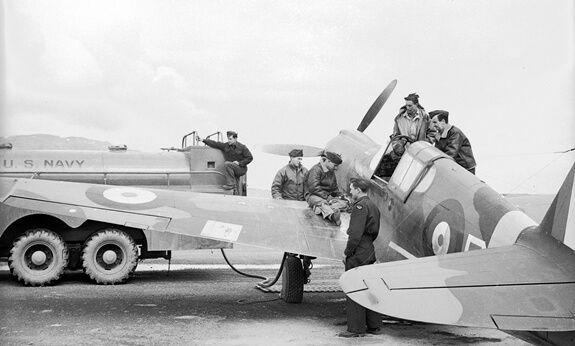 To learn more about the Aleutian Islands campaign, check out CanadianSoldiers.com.