January-March 1945: Japan’s incendiary balloon bombs arrive in North America. A desperate attempt to set the Pacific Northwest forests on fire, some of these autonomous devices found their way onto the prairies instead. On February 8/9, a decently intact example was found near Moose Jaw, SK, illustrating just how far-ranging the threat had become.

Tracking and destroying these devices, which actually dropped their incendiary and high explosive payloads at preset intervals instead of merely crashing itself into the ground, was made difficult by the limited radar capabilities in Western Canada and their high altitude. Sometimes floating as high as 30,000 ft, they could stay safely out of reach of the RCAF’s Kittyhawk fighter aircraft.

Nonetheless, many of the balloons entered North American airspace at lower altitudes, allowing them to be intercepted if spotted in time. On February 21, the RCAF achieved its first balloon kill when Flying Officer Edward E. Maxwell, seen in the painting, flew up to 25,000 ft over Sumas, BC, and shot one down.

It is suspected that only 10% of the approximately 10,000 balloons released by the Japanese arrived in North America. The 1,000 that made it achieved only limited effects, however, it was possible that had Japan kept up the program into the dry summer season, considerably more damage could have been done. 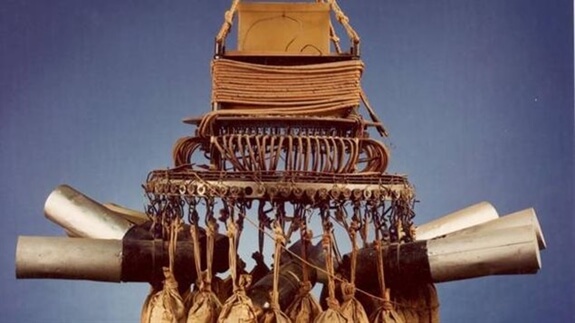 To learn about balloon bombs in Canada, take a look at this account from the CBC (2016).