During the Gulf War (1990-1991), more than 4,000 members of the Canadian Armed Forces served in the Persian Gulf. Canadian warships and warplanes were sent to aid an international coalition mandated by the United Nations which sought to drive invading Iraqi forces out of Kuwait. The Canadian military operation was codenamed Operation FRICTION and lasted nearly a year. However, Canada remained in the area to enforce peacekeeping efforts for several years after the war. This was known as Operation BARRIER.

In 1991, HMCS Restigouche was sent as the intended replacement for the Terra Nova. Restigouche was the lead-ship of seven Restigouche–class destroyers commissioned between 1958 and 1959, built by Canadian Vickers Ltd. Four destroyers from that class underwent Improved Restigouche Escort (IRE) upgrades in the 1960s and Destroyer Life Extension (DELEX) refitting in the 1970s. In the early 1990s, HMCS Restigouche was upgraded again and made war ready prior to heading to the Gulf. The war ended before the ship and her crew could make it. Instead, she was rerouted to participate in NATO Standing Naval Force Atlantic (SNFL).

On February 24, 1992, Restigouche, still outfitted with all its war upgrades, headed towards the Red Sea to participate in the Maritime Interdiction Force (MIF). The MIF was comprised of ships from the U.S., Australia, Canada, and France working to enforce United Nations economic sanctions against Iraq. Restigouche’s mission was coined Operation BARRIER and took place from February to August, 1992. Merchant ships were boarded and searched in order to ensure the sanctions were being followed and prohibited goods were not entering or leaving Iraq. Through Operation BARRIER, Restigouche became the first Canadian warship to make official visits to Saudi Arabia and Israel. In May, the long-serving destroyer completed 57 boardings and spent only eight days at port. By the end of Operation BARRIER, Restigouche completed an astounding 125 boardings. 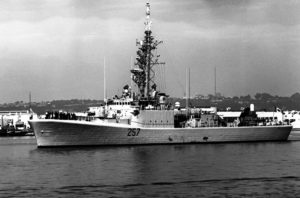 In 2001, Restigouche was intentionally sunk and used for an artificial reef off the coast of Mexico. In 2003, the United Nations lifted its economic sanctions against Iraq and the MIF was disbanded.

To learn more about Operation BARRIER, check out Forces.gc.ca.

For more about HMCS Restigouche, visit For Posterity’s Sake.