Of the 27 tribal-class destroyers that were built for the British, Canadian, and Australian navies during the Second World War, HMCS Haida boasts one of the most colourful and decorated histories. Interestingly, she is also the only destroyer from the Second World War to have survived to this day. While the rest were destroyed during combat or scrapped for parts, Haida remains on display as a National Historic Site in Hamilton Harbour, Hamilton, Ontario.

Haida was commissioned in August 1943 at Newcastle-on-Tyne, United Kingdom. She was commissioned for the Royal Canadian Navy (RCN) and staffed by Canadian sailors. Shortly after her commissioning, she was assigned to a combined RCN and Royal Navy (RN; British) fleet responsible for escorting supply convoys in the Arctic. Within her first few months, Haida completed two convoy escort missions to North Russia as part of The Murmansk Run. The Murmansk Run was a dangerous route that took the allies, including the Canadian Merchant Navy and the Royal Canadian Navy, through Arctic waters to deliver war supplies to the Soviet Union. In the frigid waters, ice formed on the outside of the ships and navy personnel had to move quickly to scrape the ice off, preventing their ship from capsizing. In addition to the weather, these waters were teeming with Nazi submarines waiting to strike. 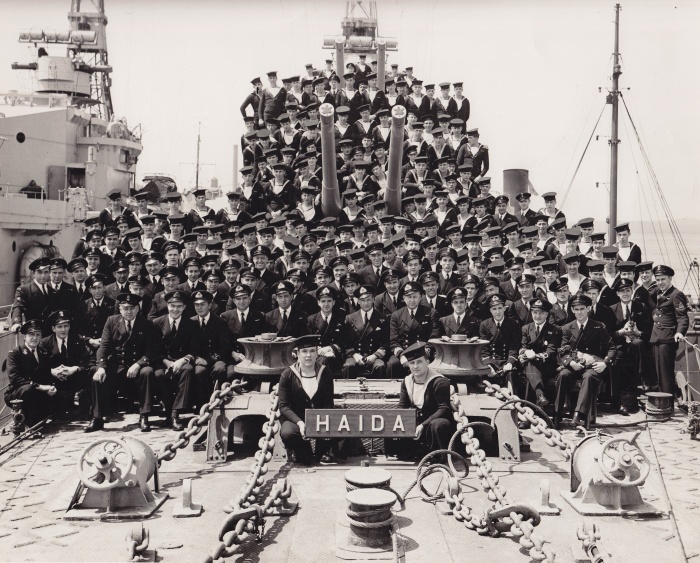 In 1944, Haida joined the Tenth Destroyer Flotilla which was a combined force of British, Canadian, and Polish navies that collaborated to prepare the English Channel for the invasion of France on June 6, 1944, also known as D-Day. The flotilla’s main objective was to eliminate German warships in the English Channel and the Bay of Biscay. During the month of April, Haida managed to sink two torpedo boats. However, it was towards the end of the month, during the night of April 28, that one conflict proved especially dangerous for the destroyer. Haida and Athabaskan, another Canadian Tribal-class destroyer, were patrolling the coast of France when they encountered two German torpedo boats. The situation turned deadly when one of the enemy boats torpedoed the Athabaskan. As the ship began to sink, the captain had no choice but to order everyone to abandon ship. In total, 128 men on the Athabaskan died and another 83 were taken prisoners of war after capture by a German patrol boat. Haida refused to back down despite being outnumbered and in grave danger. She continued to fire back aggressively, while also focusing her efforts on picking up the survivors of their sister ship. In the end, she prevailed. Haida successfully sunk one of the German torpedo boats and inflicted significant damage upon the other. Men and crew aboard the Haida also saved 44 men from the sunken Athabaskan.

After undergoing a refit in Halifax in late 1944, Haida was off again to participate in the final stages of the war. She continued to escort convoys and patrol the Arctic off the coast of Norway until Germany’s surrender in 1945. By then, Haida had earned a legendary status among Canadians for her role in the war. She sank more enemy vessels than any other RCN warship during the Second World War. 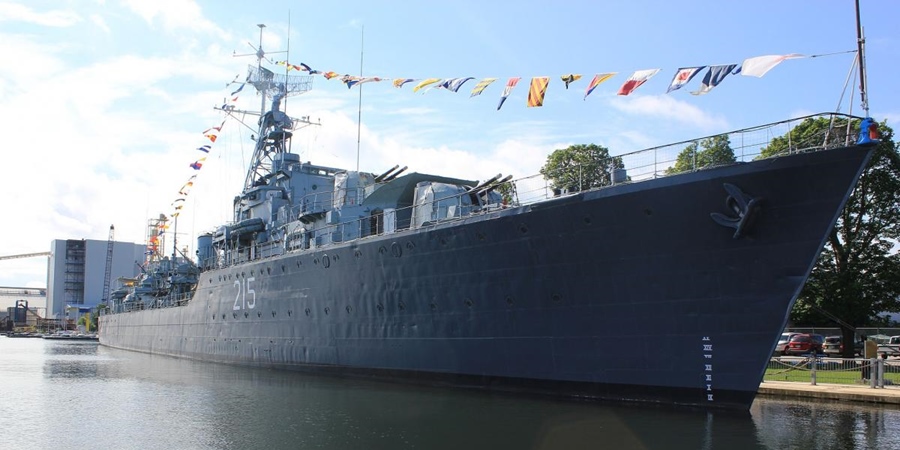 After the Second World War, Haida underwent additional repairs and upgrades, then participated in NATO exercises, the Korean War, and the Cold War before being decommissioned. In the 1960s, she was purchased by Canadian citizens in an effort to save her from being scrapped. Haida was turned into a floating memorial, and in 2003 she was purchased by Parks Canada and towed to her permanent home in Hamilton Harbour. Haida is now a preserved National Historic Site, open to visitors from around the world who hope to learn a little bit more about the famous warship known as “the fightingest ship in the Royal Canadian Navy.”

Take our virtual tour of HAIDA or visit the HMCS Haida National Historic Site in person, via Parks Canada.