January 21, 1957: After a 5-year refit that began in 1952, Canada’s last aircraft carrier, HMCS Bonaventure, was commissioned. “Bonnie” was originally the incomplete British carrier HMS Powerful and was one of the smallest carriers in the world capable of operating jet aircraft – so small, in fact, that apparently Americans wouldn’t dare operate jets on her. But that didn’t stop our pilots, who flew the Banshee jet fighter well into the ’60s. But more impressive was how, in the months following her commissioning, Bonnie’s crew worked up a way to keep anti-submarine Tracker planes and ASW helos in flight on a constant 24/7 basis – possibly the most proficient ASW unit in NATO.

During the Cuban Missile Crisis, Bonnie played the crucial role of being a primary component of the main anti-submarine barrier in the Atlantic, tasked with preventing Soviet submarines from reaching the American blockade around Cuba. This allowed the Americans to move one of their carriers further south to Cuba.

Impressed with this ability to independently provide a carrier and her escorts for weeks at a time without allied assistance, the United States offered to sell us their modernized Essex class carriers for only $4 million each – which, being twice as large as Bonnie and 50% faster, was quite a deal, especially since Bonnie’s 1966 refit alone cost $17 million. Sadly, to pay for a larger airwing and crew that would do justice to an Essex class was considered beyond the means of the Canadian budget, and the offer was never followed upon. Indeed, even Bonaventure’s own modest airwing and crew was considered too much, and on July 3, 1970, she was decommissioned – only 3 years after her refit.

To learn more about Bonaventure, check out the 7 Year Project. 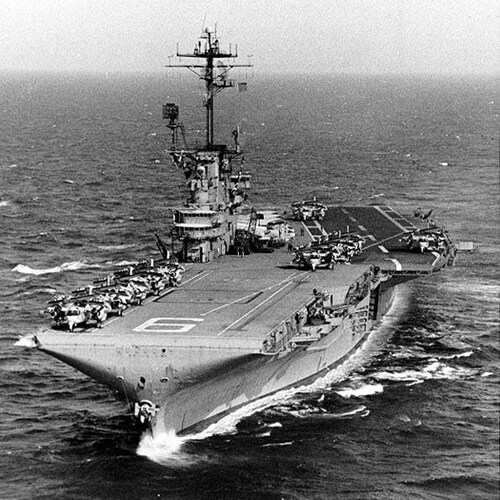 The USS Essex, carrying the same aircraft as Bonnie: S-2 Tracker anti-submarine planes. A tantalizing “what-if” had she been transferred to the Royal Canadian Navy (Credit: Navysite).