The Canadian Corps at Hill 70, led for the first time by Sir Arthur Currie, captured and held all objectives by the end of the battle’s first day. Over the next 10 days the Canadians were forced to repel over 20 counter attacks by the enemy. By the battle’s end, six men were awarded Victoria Crosses and one of these heroic men was Private Harry Brown of the 10th Battalion.

After arriving in France in the early part of 1917, Pte. Brown began serving as a messenger just in time to participate at Hill 70, a battle that began on August 15th. Brown was able to successfully make several difficult runs between the front lines and the battalion command post throughout the first day.

On day two, Pte. Brown found himself staring down a massive counter attack on a recently captured position. To make matters worse all the communication lines had been cut by artillery fire earlier that day. Pte. Brown and a fellow Canadian runner were tasked with reaching headquarters, to report the dire situation. On their way, Pte. Brown’s arm was shattered by machine gun fire and his companion was lost.

Despite his injuries, Pte. Brown managed to scramble his way through the onslaught and reach headquarters. Upon reaching the dugout, Brown collapsed and only regained consciousness long enough to pass on his important message. Private Harry Brown would pass away a few hours later, his bravery and daring having earned him the Victoria Cross.

It was the heroic sacrifice made by men like Private Harry Brown that allowed the Canadian Corps to be so successful during the First World War. His Victoria Cross resides in the archives of The Military Museums in Calgary, Alberta. 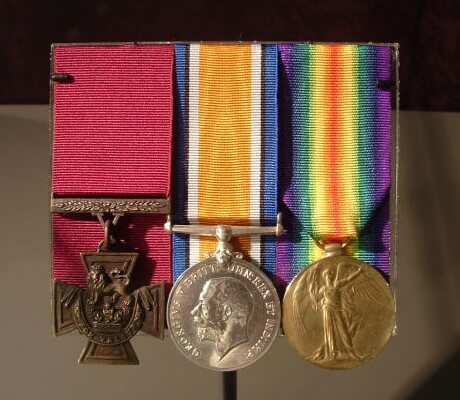 To learn more about Private Brown, check out the National Defence website.