In 1942, the Nazis were at the height of their wide-reaching hold over continental Europe during the Second World War. The Allies faced the daunting challenge of gaining a coastal foothold so that they could more successfully combat an established and strong enemy. Long before the D-Day assault on the beaches of Normandy, the Allies carried out a dangerous and deadly raid on Dieppe that tested their willpower and courage. It was a colossal failure, but troops and strategists used the experience to make changes to their tactical planning. Following the Dieppe disaster and the resulting adjustments, successful Allied assaults on Africa and Italy were launched. Then, at the beaches of Normandy on D-Day (June 6, 1944) the ultimate coastal attack was initiated, and less than a year later, Nazi Germany was defeated.

Operation Jubilee, commonly known as the Dieppe Raid, was a grab-hold-release operation that was carried out on August 19, 1942 by Canadian, British, and American troops. While it was not a full-scale assault—allied forces had neither the resources ready nor the ability to mass-mobilize for anything larger— it was still intended to draw significant German forces to the French coast; indirectly this would support the overwhelmed Soviet forces on the eastern front by drawing German forces away from that fight. Further objectives included gathering intelligence on German defenses and inflicting considerable damage on enemy-controlled ports.

Canadian soldiers were eager to be involved in the European theatre of war as they had yet to be involved in significant battles or operations during the Second World War despite having trained extensively for it. Of the 6,100 troops that were deployed, 5,000 were Canadian. Regiments including the Royal Hamilton Light Infantry, the 14th Army Tank Regiment (Calgary Regiment), the Calgary Highlanders, the Essex Scottish Regiment, the Toronto Scottish Regiment, the Royal Regiment of Canada, the South Saskatchewan Regiment, and the Queen’s Own Cameron Highlanders of Canada all participated. After the assault had begun, Les Fusiliers Mont-Royal were sent into the battle to support the Essex Scottish. Additionally, eight destroyers and 74 air squadrons, eight of which were from the Royal Canadian Air Force, accompanied the raid. 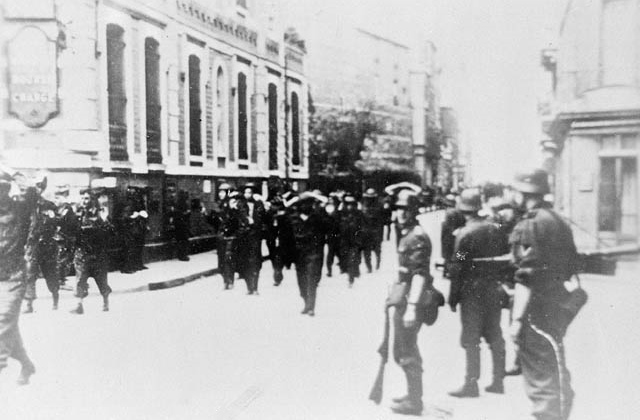 The attacks took place before dawn in an attempt to surprise the enemy. However, while crossing the English Channel one of the landing forces ran into a German naval convoy that alerted their comrades-in-arms guarding the coast. Once on the Dieppe beach, Canadian soldiers quickly found themselves outnumbered and under heavy fire from the unsurprised enemy. This resulted in many unexpected causalities. As more men continued to fall and more tanks became immobilized, the troops were ordered to retreat. While valiant efforts were made to evacuate all personnel from the beaches during the heavy rain of enemy gunfire, the last boats were unable to depart until noon. As the attack lost momentum and then fell apart, the tanks on the beach, now broken-down and unable to move, continued to fire back while other regiments retreated. Many tank crew members died protecting their countrymen or became prisoners of war after the battle had ended.

The Dieppe Raid was a devastating failure. The casualty rate – those wounded, taken prisoner, or killed – was 68 per cent. Of the 5,000 Canadians that joined Operation Jubilee, 916 died and only 2,210 made it back to England. However, the Canadian regiments were remembered for their courage under the most extreme conditions. Two Canadians, Lieutenant-Colonel Cecil Merritt and Honorary Captain John W. Foote (a Chaplain who administered first aid to multiple soldiers at Dieppe), earned Victoria Crosses for their actions during the raid. Both were captured and became prisoners after sacrificing their own safety to protect their men.

Though the cost of Dieppe was high, the war continued on. Many argue that the lessons learned from Dieppe prevented numerous unnecessary causalities on D-Day. Even Winston Churchill thought so. He said: “my impression of Jubilee is that the results fully justified the heavy cost” and it “was a Canadian contribution of the greatest significance to final victory.” 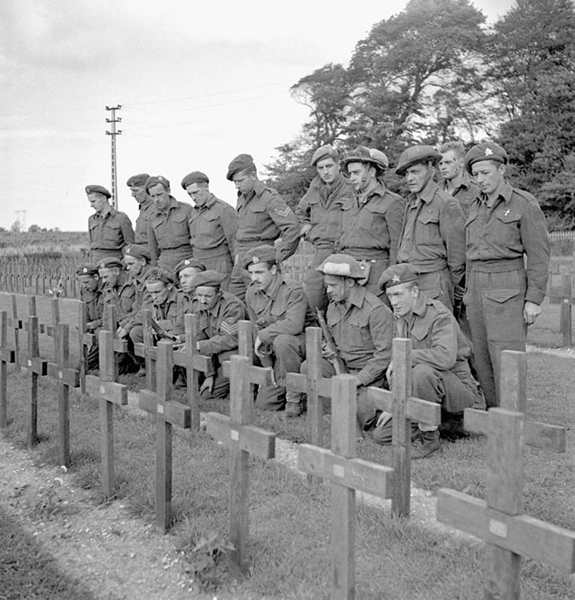 Major J. M. Figott and members of his company of the Royal Hamilton Light Infantry kneeling at the graves of Canadian soldiers killed at Dieppe on 19 August 1942. Photo taken on September 1, 1944 (Credit: LAC M#3256571).

For more on the RCAF during the Dieppe Raid, see “The RCAF At Dieppe” (Valour Canada).