Every June we experience the anniversary of one of the most historic days in modern memory, D-day, and it’s important for us to visualize the sheer magnitude of the endeavor. The events witnessed on that day by Honorary Captain Bill Wilson “had never been seen by any man on this earth before”.

On June 6th,1944, 46,000 troops, several hundred tanks, thousands of tons of supplies and vehicles, would be successfully moved by the Royal Canadian Navy (RCN). The scene appeared to be “never ending” according to Captain Wilson, as ships “disappeared into the smoke of the landings”. Miraculously the RCN only suffered 7 causalities to injuries as ships paraded on and off the varying different beaches during the raid.

This was not the only role the RCN played; prior to the 6th of June many naval vessels were given varying different jobs. Ships such as HMCS Haida and HMCS Athabaskan were used to clear the bay of German U-boats and warships. 16 Canadian minesweeping ships were also added. The scale of the operation was much larger and complex than most people give it credit for, not to mention the coordination of the vast numbers of soldiers that were about to take part. According to Captain Wilson “we had no idea of the magnitude of the operation and the amount of detail that had gone into the planning”, but when the sun raised it became abundantly clear “the horizon was packed jam with ships, nobody had ever seen that many ships”.

It is understood that the extraordinary feats accomplished during Operation Overlord would not have been possible without the tireless efforts of the Royal Canadian Navy. 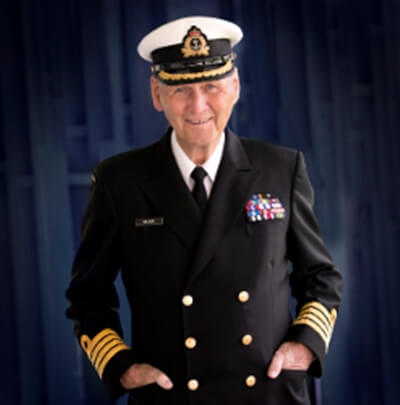 To learn more about Honorary Captain William Wilson, check out The Alberta Order of Excellence. For more information about D-Day, check out Veterans Affairs.