For the Canadian troops fighting their way through the Italian Front in December 1943, Christmas would prove to be a challenging time. Leading up to the holiday, the Canadians had finally reached the port city of Ortona on the east coast of Italy. Here they would face Hitler’s elite paratroopers who had recently been given a direct order to defend the town at all costs.

Conditions were rough as the Battle of Ortona began on the 20th of December. The Moro River had expanded over 8 times its original size as the wettest December on record continued. Even without the unanticipated weather-induced challenges, the narrow streets of Ortona were killing zones. Fortunately, the Canadians would successfully utilize a technique they called “mouseholing” to avoid the dangerous open streets. By blasting holes in the walls of buildings, the Canadian troops created covered passages that enabled them to advance through the towns while mostly sheltered from enemy fire.

By the time that Christmas Day came along, the fighting conditions had not changed. Regardless, many men, including all the Seaforth Highlanders of Canada, would still recognize the holiness of that day. In shifts, the men gathered in the basement of the bombed-out Santa Maria di Constantinopoli Church to take part in a Christmas dinner. An organist could be heard playing Silent Night as the men enjoyed a special meal that included: beer, wine, roast pork, applesauce, cauliflower, mashed potatoes, gravy, chocolate, oranges, and a variety of nuts. Cigarettes were also plentiful. The fighting raged on for three more days before the Germans finally surrendered. For some men, that Christmas meal would be their last. 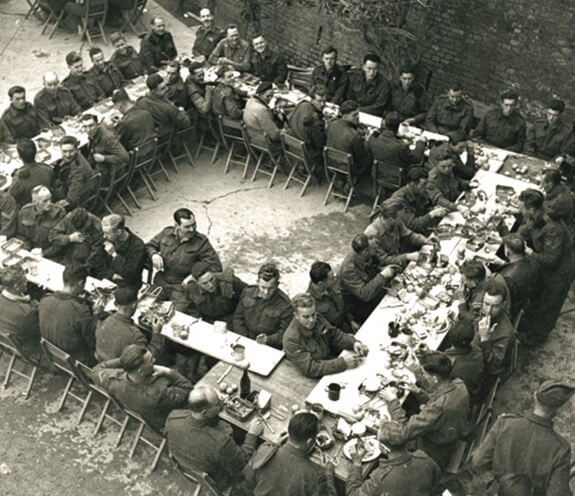 While the success of the Ortona Battle was great, so too was its cost. Canada would lose 213 men during Christmas that year, adding to what turned out to be the bloodiest month on the Italian front for the Canadians. The high casualty rate of December 1943 earned it the name “Bloody December”.