The Seven Years’ War (1756-63), fought between Britain and France, was a colonial struggle for dominance overseas. The Battle of the Plains of Abraham in 1759 represented a pivotal moment in the war when the tide turned against the French and in favour of the British. That battle ended with France surrendering control of the city of Québec. A few years later the Seven Years’ War ended with France ceding all of New France to the British under the Treaty of Paris.

After months of unsuccessful attempts to attack the fortressed and protected French troops at Québec City, General James Wolfe, leading the British, forced the resistant French to engage in open battle on the morning of September 13, 1759. The night before, Wolfe and his force of 4,500 men successfully sailed the St. Lawrence River to L’Anse-au-Foulon, a small cove 3 kilometres upstream from the city. Virtually undetected, the British troops landed and scaled the cliffs of Cape Diamond (Le cap Diamant). By 8 a.m., Wolfe had assembled his forces into a horseshoe formation that  stretched 1 kilometre over the Plains of Abraham. 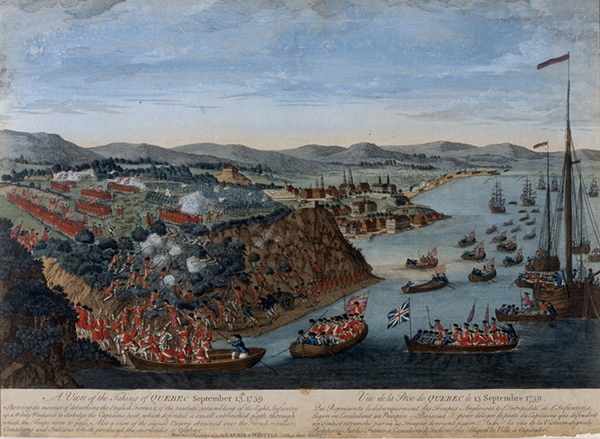 Commanding the French troops was Marquis Louis-Joseph de Montcalm. Upon learning of the nearby British troops, Montcalm dismissed the messenger, believing him to be drunk. However, upon realizing the imminent threat at hand, Montcalm decided to quickly attack the British rather than to wait for backup. Though his army was roughly the same size as the British, it was primarily made up of inexperienced soldiers from the militia and Indigenous fighters. The British, on the other hand, were trained and experienced.

As the French advanced towards the British, their lack of coordination soon proved evident. They began sporadically shooting at the British troops from more than 120 meters away. Unfazed, Wolfe instructed his men to wait until the French came within 40 meters before they fired two organized, synchronous volleys that were enough to send the French into retreat. The British quickly pursued, but without Wolfe. The British commander died on the battlefield having suffered three fatal shots during the short battle. 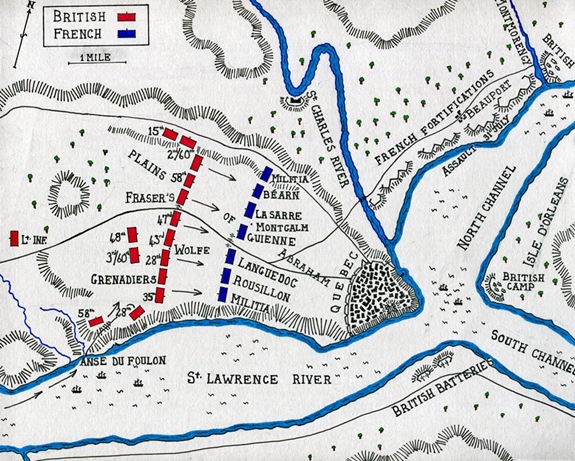 Map of the Battle of Quebec (Credit: John Fawkes, via BritishBattles.com).

During the French withdrawal, Montcalm was also injured. He died the next day in Quebec City. Both sides suffered roughly 650 casualties each.

The British continued pressing forward and began their attack on Quebec City. On September 18th, the city surrendered with the signing of the Articles of Capitulation of Québec. In the years that followed, the British captured Montreal and forced France to surrender its claim in North America with the signing of the Treaty of Paris and the ceding of New France to Great Britain. The Battle of the Plains of Abraham and the Seven Years’ War marked the beginning of Britain’s monopoly on colonial power in North America and, later on, the creation of Canada. 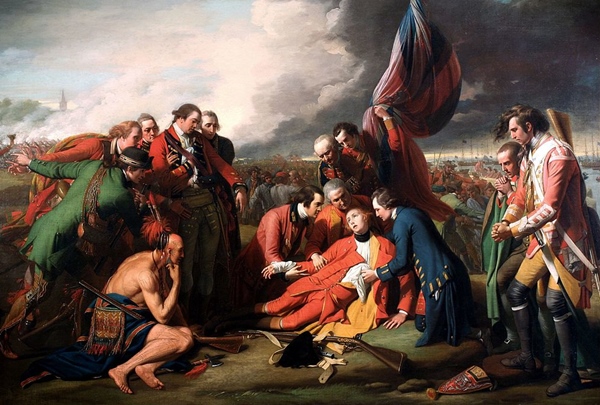 The Death of General Wolfe (Credit: Benjamin West, via Wikipedia).

To learn more, watch the Canadian War Museum’s videotaped lecture about the Battle of the Plains of Abraham (29 min).

Main Photo: The Battle of the Plains of Abraham (Credit: The Fall of New France Newsletter).