When the newly formed Canadian Corps moved into the Ypres Salient in the spring of 1915 they were unaware that the German army had already installed almost 6000 chlorine gas cylinders in the region and were impatiently waiting for an opportunity to test them in combat.

April 22, 1915, was a beautiful, sunny day. The front was relatively quiet, and the Canadians stationed in the trenches basked in the sunshine and took advantage of the relative calm to catch up on gossip and write letters home. They didn’t notice when the wind shifted and began to blow towards their French allies. Shortly after five o’clock that evening, the Canadian Corps heard the French open fire and noticed that the sun was strangely tinted with an unusual shade of green. As the Canadians watched, a thick, greenish-yellow cloud swept towards the French trenches. 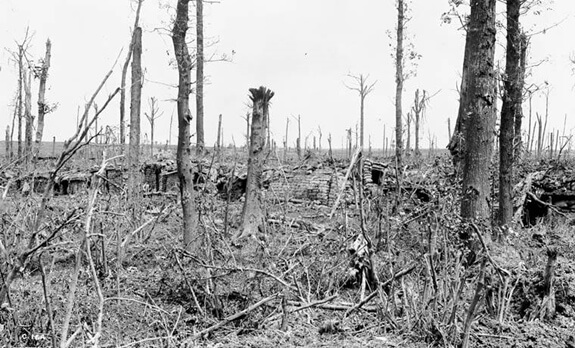 The French colonial troops were quickly overwhelmed by the chlorine gas and panicked. Several of them fled towards the Canadian trenches where the Canadians could do nothing but watch as the Algerian troops collapsed and suffocated at their feet. The disturbed Canadians turned their attention to the four and a half-mile gap that had opened in the allied line; they quickly planned a counter attack at Kitcheners’ Wood.

The German Supreme Commander, General von Falkenhayn, had underestimated the effectiveness of the chlorine gas and was unprepared to capitalize on its success. Many historians argue that if the Germans had pursued their advantage they would have taken the Ypres Salient. Their failure to do so gave the Canadians a chance to regroup and thereby prevent further German advances. However, it did not prevent the Germans from using gas against the Canadians stationed at St. Julien on April 24, but by then the surprise factor of the new weapon was significantly reduced.

To learn more about the front lines and how the men coped during the gas attack, check out The Great War.

Main photo: Soldiers with their gas masks on for protection (Credit: Canadian Press via WW1.Canada.com: The Great War).