With the release of the 2014 Hollywood Blockbuster The Imitation Game, the complex German coding system from the Second World War was introduced to popular culture. The intricate coding machine used to produce these encryptions goes by the name Enigma, meaning “the riddle” and has had several variations. It has since become an iconic symbol of the mid-20th century intelligence sectors.

Although the four-rotor Enigma machine or Wehrmacht Enigma, was widely used in all areas of the German military, it was the Navy that implemented it most effectively. The German Navy used this machine to coordinate the wolf pack tactics employed by their U-boat fleets, particularly during the Battle of the Atlantic.

It took a team of highly intelligent Polish and British scientists to create counter machines, called Bombes. These Bombes would decipher the coded message back to their original German to be translated by the Allied intelligence staff. The most recognizable scientist involved was, of course, Alan Turing, played by Benedict Cumberbatch in the film adaptation. However, what most people are unaware of, is the Canadian presence during these events. In fact, two women with ties to Canada were present at varying stages of the Enigma breakthrough at Bletchley, England, where this all took place.

A rebuilt Bombe at the Bletchley Park Museum (Credit: Tom Yates via WikiCommons).

Nance Wright, who spent the early years of her life in Ontario, immigrated back to Britain just before the outbreak of the Second World War. It was then that Wright became actively involved in the intelligence sector of the war effort. Throughout the war, Wright worked at Bletchley decoding intercepted messages and later began working with the decoded Enigma messages.

The other influence was Madge Trull, whose connection to our country comes after the War when she moved to Canada. It was then that she married Flight Lieutenant John C. Trull of the Royal Canadian Airforce. After being trained as a cryptologist, Trull was sent to work in a bay at Bletchley. Here, Trull would work alongside the Bombes to decode intercepted German communications.

It has been theorized by historians, that by deciphering the Enigma machine the Allies were able to shorten the Second World War by at least three years. If you wish to see a version of the Enigma Machine first hand, be sure to visit The Military Museum in Calgary, Alberta. There you will find a Swiss-made machine, along with an in-depth display of information. 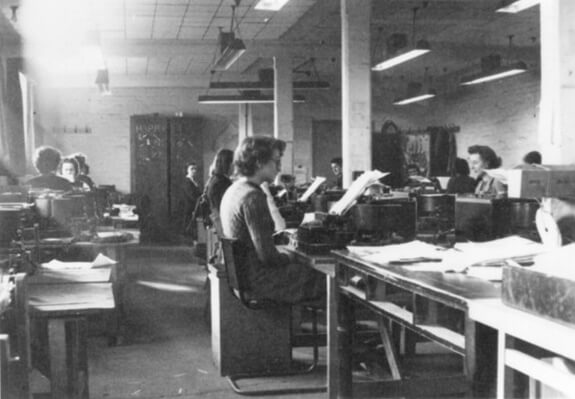 To learn more about Madge Trull, visit the Memory Project and for Nance Wright’s In Memoriam, see Legacy.

CryptoMuseum gives a good introduction to the Bombe and how it works.