April 27 and 28, 1942: Warrant Officer Herbert Victor Peterson of Calgary piloted a Halifax four-engine bomber on mining missions against the German battleship Tirpitz, hiding in a Norwegian fjord. The first night saw the Tirpitz attacked from 1,000 feet, and though smoke obscured the “Lone Queen of the North”, the 1,000 lb. mines were believed to have fallen near the ship. Peterson’s aircraft and crew managed to escape the onslaught of AA (anti-aircraft) fire and return to Lossiemouth in Scotland.

On the second night, using a different Halifax, Peterson drove home his attack below 300 feet despite even greater AA fire from the alerted German crews. Unlike the first night, however, his aircraft was not as lucky – the fire of German AA guns coming from the clifftops above, and the batteries below, was unavoidable. With an 18-inch hole in his tailplane, a foot-wide hole under his navigator’s seat, the leads to the petrol cocks shot away, and a disabled starboard engine, it was a challenge to bring the big aircraft home in one piece. Compounding the problem was fuel leakage; it threatened to crash the aircraft into the North Sea. Through careful engine management, Peterson was able to bring the aircraft back to friendly territory and landed at RAF Sumburgh three hours later. On both missions, all of his aircrew survived – a true credit to Peterson’s skills. For his achievement, Peterson was awarded his first Distinguished Flying Cross.

“His first?!” you might ask – yes indeed, for he would go on to be awarded two more, one in June 1942 and the other in May 1945. The former was for bringing home yet another Halifax despite inoperative port and starboard engines and a piece of Perspex stuck in his eye, both being suffered during an enemy fighter attack. The latter was a final recognition of his phenomenal record in bringing his aircraft and crew safely home despite multiple sorties on heavily-defended targets. 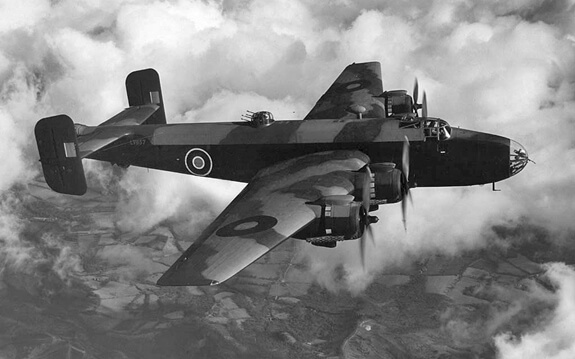 To learn about the Halifax, check out World War II Database.

For more info on Herbert Peterson, check out Canada Veterans Hall of Valour.